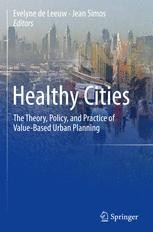 The Theory, Policy, and Practice of Value-Based Urban Planning

This forward-looking resource recasts the concept of healthy cities as not only a safe, pleasant, and green built environment, but also one that creates and sustains health by addressing social, economic, and political conditions. It describes collaborations between city planning and public health creating a contemporary concept of urban governance—a democratically-informed process that embraces values like equity. Models, critiques, and global examples illustrate institutional change, community input, targeted assessment, and other means of addressing longstanding sources of urban health challenges. In these ambitious pages, healthy cities are rooted firmly in the worldwide movement toward balanced and sustainable urbanization, developed not to disguise or displace entrenched health and social problems, but to encourage and foster solutions.

Healthy Cities will interest and inspire community leaders, activists, politicians, and entrepreneurs working to improve health and well-being at the local level, as well as public health and urban development scholars and professionals.

Evelyne de Leeuw, PhD, has worked and studied in universities in The Netherlands, the USA, El Salvador, Canada, Denmark and Australia. She holds degrees from Maastricht University and the University of California at Berkeley. Her PhD (1989) investigated the feasibility of developing and implementing Healthy Public Policy at the national level, and analysing that this is virtually impossible she found that whole-of-government health (policy) approaches would be more easily achieved at the local level – hence a commitment to Healthy Cities since the mid-1980s. Her quest for the development and application of health political science was side-lined routinely – by being elected Secretary-General of the Association of Schools of Public Health in the European Region ASPHER (1992-1998), Editor-in-Chief of Health Promotion International (since 2010), foundation director of health promotion research and public health teaching institutions (Syddansk Universitet, 2000-2005, Deakin University 2008-2013), and recreational writing outings. Currently she enjoys being professor and director of the Centre for Health Equity Training Research and Evaluation (CHETRE), based at the University of New South Wales, SouthWestern Sydney Local Health District, and the Ingham Institute.

Jean Simos, PhD, became, after his doctorate thesis, Head of a research group on environmental assessment at the Federal Institute of Technology (EPFL), Lausanne, Switzerland. From 1992 to 2000 he worked as scientific advisor for the Directorate of Public Health, Geneva, Switzerland, and from 2000 to 2007 he became its Deputy Director, in charge of environmental health and health promotion. Since 2007, he is Head of the research group on environmental health, Institute of Global Health, University of Geneva. He was involved in the WHO Healthy Cities European Network from 1994 to 2007 as a local coordinator and since 2009 as a WHO advisor. He is also president of the WHO Collaborating Centre for francophone Healthy Cities, Rennes, France. He took on several missions around the world for WHO, World Bank and Swiss Development & Cooperation Agency as an environmental health expert, particularly in link with health promotion, Healthy Cities, health impact assessment, and multiple criteria decision aid (ELECTRE methods). He is invited professor at the University of Liege, Belgium, since 2011, was invited lecturer in University Paris-Dauphine in 2015, and he is a member of the High Council for Public Health, France, since 2011.