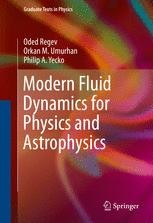 This book grew out of the need to provide students with a solid introduction to modern fluid dynamics.  It offers a broad grounding in the underlying principles and techniques used, with some emphasis on applications in astrophysics and planetary science.

The book comprehensively covers recent developments, methods and techniques, including, for example, new ideas on transitions to turbulence (via transiently growing stable linear modes), new approaches to turbulence (which remains the enigma of fluid dynamics), and the use of asymptotic approximation methods, which can give analytical or semi-analytical results and complement fully numerical treatments. The authors also briefly discuss some important considerations to be taken into account when developing a numerical code for computer simulation of fluid flows.

Although the text is populated throughout with examples and problems from the field of astrophysics and planetary science, the text is eminently suitable as a general introduction to fluid dynamics.   It is assumed that the readers are mathematically equipped with a reasonable knowledge in analysis, including basics of ordinary and partial differential equations and a good command of vector calculus and linear algebra.

Each chapter concludes with  bibliographical notes in which the authors briefly discuss the chapter's essential literature and give recommendations for further, deeper reading.  Included in each chapter are a number of problems, some of them relevant to astrophysics and planetary science. The book is written for advanced undergraduate and graduate students, but will also prove a valuable source of reference for established researchers.

Dr. Oded Regev received his B.Sc. in Physics and Mathematics from the Hebrew University in Jerusalem, Israel and went on to receive his Physics PhD, in 1981, from the Tel Aviv University, Israel. He conducted his post-doctoral research at the University of Florida after which he held a lecturer position at the Physics Faculty of the Technion in Haifa, Israel. He advanced to Full Professor in 1996 and retired in 2006 and received the status of Professor Emeritus.  He spent his sabbaticals in England (Leicester University), France (Grenoble University and later in the Paris Institute d'Astrophysique). His two year (1987-1989) leave of absence was devoted to research and teaching at Columbia University. He lives now in New York, doing some collaborative research but focusing mainly on writing physics text books and recently fiction in the form of short stories. regev@physics.technion.ac.il  www.regevale.com

Dr. Orkan M. Umurhan received his B.Sc. from UCLA and his PhD from Columbia University.  He has taught astronomy, physics and applied mathematics at City College of San Francisco, San Jose State University and University of California Merced.  He went on to postdoctoral and research scientist positions at Technion, Tel Aviv University, Queen Mary University of London and the SETI Institute.  His research areas include astrophysical and geophysical fluid flows, planet formation, geomorphology and landform evolution.  He currently works in the Space Sciences and Astrobiology Division of NASA Ames Research Center, where he is a member of the New Horizons science team. orkan.m.umurhan@nasa.gov

Dr. Philip A. Yecko received his S.B. in Physics from the Massachusetts Institute of Technology and PhD in Astronomy from Columbia University, followed by post-doctoral research at University of Florida and Paris VI.  After a lectureship in Computational Physics at Trinity College Dublin, he joined the faculty of Columbia University, Astronomy Department, followed by Montclair State University, Mathematical Sciences, spending sabbaticals at M.I.T. Mathematics and the Applied Math Lab, N.Y.U. Courant Institute.  Currently he is Associate Professor of Physics at The Cooper Union for the Advancement of Science and Art in New York City, where he directs the Complex Fluids lab.  His current research is in biological, geophysical and multi-phase fluid dynamics.  yecko@cooper.edu

“This hefty tome offers a comprehensive introduction to fluid dynamics, mainly with application to planetary science and astrophysics in mind. ... it is a useful resource for course development. It certainly offers a wealth of interesting insights into fluid dynamics and plasma physics for those with experience, and I found it to be an enjoyable and informative read.” (David A. Burton, The Observatory, Vol. 137 (1260), October, 2017)

“Modern Fluid Dynamics for Physics and Astrophysics is a welcome addition that helps fill the gap between introductory and advanced books. … The textbook is especially suited for graduate courses, but I believe that it can also be easily used for senior undergraduate courses. … Modern Fluid Dynamics for Physics and Astrophysics to be a very good resource, not just for astrophysics and geophysics courses but for any physics course that covers the fundamental topic of fluid dynamics.” (Giuseppe Lodato, Physics Today, May, 2017)