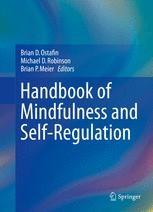 Handbook of Mindfulness and Self-Regulation

This empirically robust resource examines multiple ways mindfulness can be harnessed to support self-regulation, in part as a real-world component of therapy. Its authoritative coverage approaches complex mind/brain connections from neuroscience, cognitive, personality, social, clinical, and Buddhist perspectives, both within and outside traditional meditation practice. In domains such as letting go of harmful habits and addictions, dealing with depression and anxiety, regulating emotions, and training cognitive function, contributors show how mindfulness-based interventions encourage and inspire change. In addition to scientific coverage, experts translate their methods and findings on mindfulness mechanisms in terms that are accessible to students and clinicians.

Included in the Handbook:

Heralding a new era of mind/brain research--and deftly explaining our enduring fascination with mindfulness in the process--the Handbook of Mindfulness and Self-Regulation will enhance the work of scholars and practitioners.

Brian D. Ostafin, PhD, is an associate professor in the experimental psychopathology and clinical psychology program at the University of Groningen, The Netherlands. He received his doctorate in clinical psychology from Boston University in 2004. His research focuses on the role of implicit processes in psychopathology (with an emphasis on addictive behaviors) and the usefulness of mindfulness interventions to overcome such processes. This work has been funded by the NIH and other agencies.

Michael D. Robinson, PhD, is a Professor of Psychology at North Dakota State University. He received his doctorate in social psychology from the University of California, Davis, in 1996. Subsequently, he was trained in a three-year NIMH-supported postdoctoral position, working during this time with Richard J. Davidson and Gerald L. Clore. He is a prolific researcher in the areas of personality, assessment, self-regulation, cognition, and emotion. In addition, his work has been funded by NSF and NIH. He has been or is an Associate Editor for Cognition and Emotion, Emotion, Journal of Personality, Journal of Personality and Social Psychology, and Social and Personality Psychology Compass (emotion/motivation section). In addition, he has edited two recent books: Handbook of Cognition and Emotion (Robinson, Watkins, & Harmon-Jones, 2013; Guilford Press) and The Power of Metaphor (Landau, Robinson, & Meier, 2014; American Psychological Association). He is considered an expert in implicit approaches to personality and in cognitive approaches to emotion and self-regulation.

Brian P. Meier, PhD, is an associate professor of psychology at Gettysburg College, where he teaches courses on general psychology, social psychology, and statistics. He received his doctorate in social psychology from North Dakota State University in 2005. His research is focused on social and personality psychology topics including mindfulness, self-regulation, embodiment, emotion, aggression, and prosocial behavior. Dr. Meier is a consulting editor for multiple journals and his research has been funded by multiple agencies.