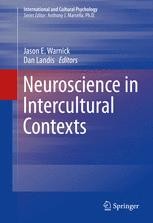 This breakthrough volume brings together cultural neuroscience and intercultural relations in an expansive presentation. Its selected topics in reasoning, memory, and other key cognitive areas bridge the neuroscience behind culture-related phenomena with the complex social processes involved in seeing the world through the perspective of others. Coverage ranges beyond the familiar paradigms of acculturation and cultural differences to propose new ideas of potential benefit to the new generation of immigrants, negotiators, executives, and other travelers. Taken together, these chapters offer a deeper understanding of issues that can only become more important as the world becomes smaller and our global family larger.

Among the topics featured:

With its elegant perspectives and empirical depth, Neuroscience in Intercultural Contexts is a forward-looking reference for researchers in the cultural sciences (cross-cultural psychologists, anthropologists, etc.) and in social, affective, and cognitive neuroscience.

Jason E. Warnick is Associate Professor of Psychology in the Department of Behavioral Sciences at Arkansas Tech University, and holds a doctorate in Experimental Psychology from The University of Mississippi. He is a fellow of the International Stress and Behavior Society and on the editorial board of seven peer-reviewed journals. In 2013, he was voted by his university’s student body to receive the Professor of the Year Award, and in 2014, he received the Arkansas Tech University Faculty Excellence Award for Service. Additionally, he has received awards for academic advising from the National Academic Advising Association and for online course design from the Blackboard Catalyst Award Program. His research in the fields of neuroscience and sport psychology has been published in variety of journals and edited books and has been featured in numerous media outlets.

Dan Landis (Ph.D, General-theoretical Psychology, 1963, Wayne State University) has held se4veral academic and consulting positions, including Affiliate Professor of Psychology at the University of Hawaii (both Manoa and Hilo campuses), Professor Emeritus of Psychology and Dean Emeritus, University of Mississippi.  He is a past Chair of the Department of Psychology at Indiana-Purdue University, Indianapolis, Research Psychologist at Educational Testing Service,  Senior Research Psychologist at the Franklin Institute Research laboratories, and Visiting Research Professors at the East-West Center and the Defense Equal Opportunity Management Institute.  Dr. Landis is the author/co-author is over 100  books, articles, technical reports and presentations in such areas as: the measurement of equal opportunity climate in military and civilian organizations, racial and gender discrimination, perception, statistics, sexual behavior and attitudes, and cross-cultural psychology and training.  He is the founding Editor-in-Chief of the International Journal of Intercultural Relations (1977-2011), the founding President of the International Academy for Intercultural Research(1997-2005), the coeditor/author of Ethnic Conflict (Sage, 1985), the coeditor/author of the three editions of the Handbook of Intercultural Training (1986, 1996, and 2004) and coeditor/author of Handbook of Ethnic Conflict ( Springer, 2012).  A Mandarin translation of the 2004 Handbook was published by Peking University Press in 2010. Dr. Landis is a Fellow of the American Psychological Association, a Fellow of the Society for the Psychological Study of Social Issues, and a Fellow of the Association for Psychological Science.  He is listed in Who’s Who in America and other biographical compendiums.  In 1987, Dr. Landis, together with Dr. Mickey Dansby and Dr. Gloria Fisher developed the Military Equal Opportunity Climate Survey (MEOCS) which, in various versions, is in wide use throughout the U.S. Department of Defense.  During 1994-96, Dr. Landis was appointed the first Shirley J. Bach Visiting Professor at the Defense Equal Opportunity Management Institute (DEOMI).  During his tenure at DEOMI, he conducted further studies of equal opportunity climate in the U.S. Armed Forces as well as investigated racial disparities in the military justice system.  In 2007 he was given a Lifetime Achievement Award by the International Academy for Intercultural Research and, in 2012, he was honored by the American Psychological Association with its award for Distinguished Contribution to the Internationalization of Psychology.  Since 2005, he has been the Executive Director and Treasurer of the International Academy for Intercultural Research.  In 2013, he was appointed the Editor for Behavioral Sciences of SpringerPlus, an open access, highly peer reviewed, and on-line journal published by Springer Open.  A fourth edition of the Handbook of Intercultural Training is now in progress with a publication date of 2015.

"The field of neuroscience is rich with interdisciplinary collaborations and inquiries into far-reaching domains. In Neuroscience in Intercultural Contexts, Warnick and Landis bring together an excellent set of research scholars that delve into yet a new domain: the emerging neuroscience of cultural differences that shape our thinking, feelings, and actions. This resource provides readers both a current state of knowledge in the field but also a roadmap in asking new research questions leading to new discoveries of the interplay between culture and neuroscience."
Kenneth Sufka, Ph.D.
Professor of Psychology, Pharmacology & Philosophy
Research Professor, RIPS/NCNPR
The University of Mississippi

"That cultural differences strongly influence human behaviors, we all have long guessed, at least since Helen of Troy, if not earlier. "Neuroscience in Intercultural Contexts" by Warnick and Landis provides a much needed, timely and solid scientific framework behind these phenomena. The book offers an authoritative, up-to-date summary of 'hardcore" neuroscience research underlying human culture-related behavioral differences. As Plato once noted, human behavior flows from desire, emotion and knowledge. Because the book comprehensively (and in an exceptionally engaging manner) addresses the cross-cultural aspects of all these three main sources, it will be a useful, thought-provoking reading for both established scholars and curious student minds. Equally importantly, the book builds logical bridges between personalized psychology and personalized medicine - another important topic that is logically related to those discussed here."
Allan V Kalueff, PhD
Distinguished Chair Professor of Neuroscience and Pharmacology, Guangdong Ocean University, China
Professor of Neuroscience, St. Petersburg State University, Russia
President, International Stress and Behavior Society (ISBS)

"Jason E. Warnick and Dan Landis’ masterwork, Neuroscience in Intercultural Contexts, is a must read for anyone interested in Cultural Studies or the neurosciences.  The chapters are delightful, touching, and a great review of the newest and best of current neuroscience research."
Professor Elaine Hatfield
Professor of Psychology
University of Hawaii at Manoa

"In this pioneering volume, Warnick and Landis present a collection of some of the best cutting-edge works in cultural neuroscience. Each chapter offers a solid empirical grounding for, and a cogently formed neuroscience-based insight into, how cultural differences in human mind are likely to shape the experiences of interacting with people across cultural boundaries. Together, the chapters help to clarify and deepen our current understanding of the brain-culture interface, and serve as a significant impetus for the continuing development and integration of the fields of cultural neuroscience and intercultural relations."
Young Yun Kim, Ph.D.
Professor of Communication
University of Oklahoma