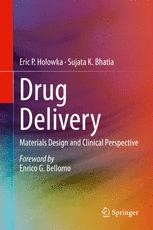 Current pharmaceutical and clinical approaches to the treatment of disease suffer from the inherent limitations in the specialization of drugs introduced to physiological systems. The interface of clinical and material sciences has allowed for a broad spectrum of creative approaches with the potential to alleviate these shortcomings. However, the synergy of these disciplines also presents problems in which nascent technology lacks the necessary evaluation within its intended clinical environment. Given the growing potential for materials science to address a number of unanswered therapeutic needs, it remains even more pressing to validate emerging drug delivery technologies in actual clinical environments.

Drug Delivery: Materials Design and Clinical Perspective addresses the core fundamentals of drug delivery using material science and engineering principles, and then applies this knowledge using prominent examples from both the scientific literature and clinical practice. Each chapter focuses on a specific drug delivery technology, such as controlled-release materials, thin-film materials, or smart materials. Within each chapter, an initial section on “Engineering Concepts” reviews the relevant fundamental principles that guide rational design. The following section on “Materials Design” discusses how the design process applies engineering concepts for use in physiological systems. A third section on “Implementation” discusses current approaches in the literature which have demonstrated effective drug delivery in controlled environments. Finally, each chapter contains several sections on “Clinical Applications” which describe the validity of materials approaches from a clinical perspective; these sections review the safety and efficacy of drug delivery systems for specific, compelling medical applications. The book thereby bridges materials science with clinical medicine, and provides the reader with a bench-to-bedside view of novel drug delivery systems.

Eric P. Holowka is a Senior Research Investigator with DuPont Central Research & Development and holds appointments as Visiting Assistant Professor in both the Materials Science & Engineering Department at Drexel University and the Chemistry Department at Haverford College. Since 2007, he has led different research discovery and/or implementation efforts within Central Research involving the application of drug delivery methodologies to a broad range of technology areas encompassing regenerative medicine, energy storage, food science, agriculture, and nutrition, which has led to the publication of over 16 patents. He earned his bachelor’s degree in chemistry with a minor in Polymer, Colloidal, and Surface Science at Carnegie Mellon University, while concurrently studying at the Center for Macromolecular Engineering under the guidance of Krzysztof Matyjaszewski as a Howard Hughes undergraduate research fellow. He then attended the University of California Santa Barbara (UCSB), where he earned his Ph.D in Materials Science & Engineering as a California NanoSystems Institute Fellow under Timothy Deming for his work on the design and implementation of self-assembled polypeptide copolymers for use in targeted drug delivery and tissue engineering. Prior to joining DuPont, he worked in research and development, intellectual property, and in-vitro trials at University of California Los Angeles’ (UCLA) Department of Biomedical Engineering and in immunology, biochemistry, and cell biology at Cornell University’s Department of Chemistry and Chemical Biology. The drug delivery technologies that Dr. Holowka developed in his time at UCSB and UCLA have been featured in Chemical & Engineering News (Technology Concentrates 2006), cited over 500 times in scientific journals and textbooks, and licensed to several biotechnology and drug delivery companies as part of their core technology platforms. He has been invited to speak at a number of universities for his work on “Rational Biomaterial Design for use in Intracellular Drug Delivery”. In 2010, he published a textbook, “Copolypeptide Vesicles: Size Control for Intracellular Drug Delivery,” which discusses core technologies behind the design and implementations of peptide-based drug delivery systems from the synthetic chemistry and materials science perspective.

Sujata K. Bhatia is a faculty member in Biomedical Engineering at Harvard University, and serves as the Assistant Director for Undergraduate Studies in Biomedical Engineering at Harvard. She is also an Associate of the Harvard Kenned School of Government, and a faculty member in the Harvard Kennedy School Executive Education program on Innovation for Economic Development. She earned three bachelor’s degrees, in biology, biochemistry, and chemical engineering, and a master’s degree in chemical engineering at the University of Delaware. She then attended the University of Pennsylvania School of Medicine, where she earned her M.D. and Ph.D in bioengineering. Prior to joining Harvard, she worked in research and development, intellectual property, and clinical trials at DuPont. From 2003 to 2008, she worked to develop tissue adhesives for closure of wounds. In 2009, she spent a year on technology licensing for cancer drug discovery. In 2010 and 2011, she led clinical trials of omega-3 fatty acids for heart health. She was an invited participant in the 2005 U.S. Frontiers of Engineering and 2006 Japan-U.S. Frontiers of Engineering symposia, and a co-organizer of the 2007 Japan-U.S. Frontiers of Engineering symposium. In 2010, she published a textbook, “Biomaterials for Clinical Applications,” which discusses opportunities for both biomaterials scientists and physicians to alleviate diseases worldwide. In 2011, she published another book, “Engineering Biomaterials for Regenerative Medicine.” In 2013, Sujata was awarded the Capers and Marion McDonald Award for Excellence in Mentoring and Advising, the highest award in the Harvard School of Engineering and Applied Sciences for excellence in advising. She was also awarded the Star Family Prize for Excellence in Advising, a distinguished award from Harvard University for exemplary intellectual and personal guidance of undergraduate students. In 2013, she was selected by the U.S. National Academy of Engineering for Frontiers of Engineering Education, a recognition for the most innovative engineering educators in the nation. In 2014, she was voted by the Harvard College Class of 2014 as a Harvard Yearbook Favorite Professor.