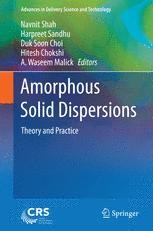 Amorphous Solid Dispersions: Theory and Practice is a valuable reference to pharmaceutical scientists interested in developing bioavailable and therapeutically effective formulations of poorly soluble molecules in order to advance these technologies and develop better medicines for the future.

Dr. Navnit Shah is president and CSO of Kashiv Pharmaceuticals in Bridgewater, New Jersey. Prior to joining Kashiv, he was a distinguished scientist at Hoffmann-La Roche Inc., where he headed the oral dosage form development group for many years. He received his Ph.D. in pharmaceutics from St. John’s University in Queens, New York, and he has published 120 abstracts and more than eighty scientific papers in the drug delivery area, particularly in the field of amorphous solid dispersion. He is inventor and co-inventor on nineteen issued patents and thirteen patent applications. He is the recipient of numerous awards, including AAPS Fellow, Thomas Alva Edison Patent Award, St John's University Distinguished Alumni Award, New Jersey Biomedical Research Leadership Award, and the New Jersey Inventor of the Year award by New Jersey Inventors Hall of Fame (NJIHoF). He is an adjunct professor at the University of Rhode Island in Kingston and has mentored several graduate students for their M.S. & Ph.D. research.

Dr. Harpreet K. Sandhu is a principal scientist at Merck, Inc. in the formulation sciences group. Prior to this, she was at Hoffmann-La Roche Inc., where she held positions of increasing responsibility in the area of oral formulation development. She received her Ph.D. in physical pharmacy from the University of Connecticut in Storrs and an M.B.A. from Rutgers University in Newark, New Jersey. Her research interests have been shaped by her ardent desire to meet the growing challenges of poor aqueous solubility. During her tenure at Roche, she led the development of multiple programs covering simple formulations to the most complex delivery systems and mentored junior scientists, graduate students and postdocs.

Dr. Duk Soon Choi is a vice president at Kashiv Pharmaceuticals in Bridgewater, New Jersey. His responsibilities include the leadership of the preformulation and chemistry teams. Dr. Choi’s research focuses on active pharmaceutical ingredient (API) modifications and drug delivery systems to overcome the challenges presented by molecules with poor drug-like properties. He received his Ph.D. in Chemistry from Louisiana State University in Baton Rouge, and prior to joining Kashiv, he was the head of the Preformulation and Solid State Group at Hoffmann-La Roche in Nutley, New Jersey, where he played a key role in transitioning a number of discovery compounds into clinical studies.

Dr. Hitesh P. Chokshi is a senior leader in pharmaceutical research and early development at Roche Innovation Center, New York. He joined Roche in Nutley as a preformulation scientist after completing his Ph.D. and postdoctoral research at the University of Georgia in Athens, Georgia, and University of Kansas in Lawrence, respectively. Hitesh has held diverse scientific and leadership responsibilities at Roche for the development of new medicines: small molecules, peptides, and biologics. His research includes pharmaceutical profiling, development and characterization of fit-for-purpose dosage forms for toxicological and clinical studies as well as for the market. He has a special interest in amorphous solid dispersion (ASD) design and characterization, establishing predictive in-vitro models to de-risk bioequivalence, and in quality by design (QbD) solid state characterization of drug substances and dosage forms.

Dr. A. Waseem Malick is a retired pharmaceutical R&D executive who has had an extensive career in the industry, previously serving as vice president and global head of pharmaceutical and analytical R&D at Hoffmann-La Roche.  He received his Ph.D. in pharmaceutics from the University of Michigan, Ann Arbor, and an M.S. in pharmaceutics from Columbia University, New York. His research interests include drug product development, formulation and drug delivery research. He has published 110 research papers and 169 abstracts and has presented extensively in the area of drug delivery research. He was elected as fellow of the American Association of Pharmaceutical Scientists (AAPS) and has received several honors and awards. He serves on the board of directors of several non-profit organizations and on the Science Board of Advisors at New York University. He also has an adjunct professor appointment at the University of Rhode Island in Kingston.