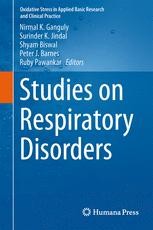 This volume covers data describing the role of free radicals and antioxidants in respiratory disorders, including the data that deal with clinical and pre-clinical trials. Chapters describe the relationship of oxidative stress to a number of respiratory and pulmonary conditions from a basic science and clinical perspective, including chronic obstructive pulmonary disease, asthma, acute lung injury, pulmonary hypertension, toxicity and fibrosis, cancer and asbestosis. The book also discusses the use of conventional biomarkers of oxidative stress and breath condensates as adjuncts to classical laboratory testing, the effect of antioxidants on cellular protection, as well as the development of novel antioxidant modalities.

Nirmal Kumar Ganguly, M.D is a Distinguished Biotechnology Research Professor, Government of India, a former Director General, Indian Council of Medical Research and Director, National Institute of Biologicals (Noida). In addition to earning a Doctorate of Science honoris causa from Bundelkhand University, Jhansi in 2000 and Honorary Doctor from Yerevan State Medical University in 2001, he has achieved several other qualifications including FNA, FNASC, FASC, FRCPath, FRCTrop, and FAMS. His major research interest encompasses the disciplines of Immunology, Biotechnology and Public Health.

He is Fellow, Imperial College Faculty of Medicine, London; Royal College of Pathologists, London; International Academy of Cardiovascular Sciences, Canada and several other bodies. He is also an Honorary Global Health Research Fellow and Adjunct Professor, Boston University and of Environmental Health, School of Public Health, University of Minnesota, USA. He is also a Member of the Scientific Board, Grand Challenges, Bill & Melinda Gates Foundation. He has received numerous awards and honoured with the prestigious Padma Bhushan Award by Her Excellency, the President of India in 2008 in the field of “Medicine”.

Dr. Surinder K. Jindal completed his medical education at Postgraduate Institute of Medical Education and Research, Chandigarh, India  and joined the faculty soon thereafter. Currently, he is a Professor and Chief of the Department of Pulmonary Medicine there and he was instrumental in establishing its fellowship program in pulmonary and critical care medicine, the first such program in India. He has received multiple awards and honors including the Outstanding Educator Award by the American Thoracic Society. He has conducted extensive research work, particularly related to epidemiology of respiratory diseases.

A former President of the Indian Chest Society, he is a Fellow of the National Academy of Medical Sciences. A prolific author or scientific papers, Dr. Jindal has conducted extensive research, particularly related to the epidemiology of respiratory diseases and the nation-wide Indian Study on Epidemiology of Asthma, Respiratory symptoms and Chronic bronchitis (INSEARCH). Dr Jindal has served as the Chief-Editor of Lung India,  Chest (India Edition), Associate Editor of the Chest, International Journal of TB & Lung Diseases, and several other journals.

Shyam Biswal, PhD completed his PhD in Biotechnology at Indian Institute of Technology, Bombay and was a Postdoctoral Fellow at University of Texas, Austin. He is a Professor of Environmental Health Sciences and Director of Center for Global Clean Air at the Johns Hopkins Bloomberg School of Public Health and Professor of Pulmonary and Oncology at the Johns Hopkins School of Medicine. His laboratory is focused on discovering the novel mechanisms of host defense that determine immune- pathobiology of environmental lung diseases to develop experimental therapeutics  and developing Nrf2 as a therapeutic target for COPD and other inflammatory lung diseases using small molecules. Dr. Biswal has published more than 120 papers and has extensively funding from NIH and other foundations. He serves as a member on the committee of the American Thoracic Society, the editorial board of the American Journal of Physiology and the American Journal of Respiratory Cell and Molecular Biology.

Professor Peter Barnes DM, DSc, FRCP, FCCP, FMedSci, FRS qualified at Cambridge and Oxford Universities (first class honours). He is Margaret-Turner Warwick Professor of Medicine at the National Heart and Lung Institute, Head of Respiratory Medicine at Imperial College and Honorary Consultant Physician at Royal Brompton Hospital, London. He has published over 1000 peer-review papers on asthma, COPD and related topics and has written or edited over 50 books. He is the 7th most highly cited researcher in the world, has been the most highly cited clinical scientist in Europe and the most highly cited respiratory researcher in the world over the last 20 years. His research is focused on cellular and molecular mechanisms of asthma and COPD, understanding and developing therapies and research into biomarkers for these diseases. He is involved in multidisciplinary translational research which integrates basic science with clinical studies, thereby providing novel insights into common airway diseases.

A Fellow of the Royal Society, Dr. Barnes is currently a member of the Scientific Committee of global guidelines on asthma and COPD. He also serves on the Editorial Board of over 30 journals, is a NIHR Senior Investigator, a Master Fellow of the American College of Chest Physicians and a member of Academia Europaea.

Professor Ruby Pawankar MD, Ph.D, FRCP, FAAAAI is President, World Allergy Organization. In addition, she is Professor of Allergy, Department of Pediatrics at Nippon Medical School in Tokyo, Japan, and Guest Professor at the Kyung Hee University School of Medicine in Seoul, South Korea, and Showa University School of Medicine in Tokyo, Japan. After graduating in medicine from the Armed Forces Medical College in Pune, India, Prof. Pawankar did her residency and post graduation from BJ Medical College, also in  Pune. Thereafter, she trained in Allergy & Clinical Immunology at Nippon Medical School and Juntendo University School of Medicine in Tokyo, Japan where she earned her doctorate. Professor Pawankar's research has  been strongly translational  in nature, applies to clinical allergy and has  focused on the cellular and molecular mechanisms of allergy. Her work on mast cells in atopics has formed the basis of the successful biological therapeutic targeting. She is an Editor of several peer reviewed journals, has edited books and is a Member/ Fellow of several academic societies in allergy, asthma and rhinology, a member of the Collegium International Allergolocum and on the boards of several organizations. Prof. Pawankar has widely published in the field of allergy asthma and clinical immunology and has been a recipient of several national and international awards.

“This volume provides the best current knowledge in the field from translational research to implementation in everyday clinical practice. … As a comprehensive overview of oxidative stress as a key component in the pathogenesis of respiratory diseases, with very important practical parts for diagnosis (biomarkers of oxidative stress and breath condensates) and for treatment, this new book will be useful to researchers and to clinicians alike who study and care for patients with lung diseases.” (Alexandru Corlateanu, World Allergy Organization, WAO Medical Book Reviews, worldallergy.org, September, 2014)