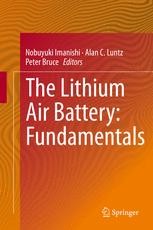 Lithium air rechargeable batteries are the best candidate for a power source for electric vehicles, because of their high specific energy density. In this book, the history, scientific background, status and prospects of the lithium air system are introduced by specialists in the field. This book will contain the basics, current statuses, and prospects for new technologies. This book is ideal for those interested in electrochemistry, energy storage, and materials science.

Nobuyuki Imanishi is a professor of Chemistry at the Graduate School of Engineering, Mie University, Japan. He studied industrial electrochemistry in 1986-1990 and received his Ph.D from Kyoto University. He started his research professionally in 1990 at Mie University where he also held the positions of assistant and associate professor.  His main research focuses on functional materials and electrochemistry - particularly energy conversion and storage materials such as electrode materials for lithium batteries and fuel cells, and solid-state electrolytes for those batteries. His research also includes polymer lithium ion batteries and lithium-air batteries.

A. C. Luntz is currently a Consulting Professor in Photon Sciences at the SLAC National Accelerator Laboratory (USA) and is a consultant to IBM research. He obtained his PhD in physical chemistry in 1969 from the University of CA, Berkeley and spent the next 25 years as a research staff member in IBM research. Following this he became Professor of Physics at the University of Southern Denmark (SDU) for five years before returning to California, at which time he became a Consulting Professor of physics at both SDU and Aarhus University. Since returning to CA, he has continued his many collaborations both in Denmark and elsewhere around the world, sometimes with extended visits, e. g. he spent a year in Berlin on a Humboldt Senior Research Award. During his ~50 year research career, Luntz has been involved in many research fields; laser spectroscopy, reactive gas phase dynamics, surface science and especially gas-surface dynamics, astrochemistry and most recently batteries. In 2009 he rejoined IBM Almaden as a consultant to help Winfried Wilcke start a program in Li-air batteries and shortly thereafter instigated/initiated a theoretical program on Li-air at SLAC in the SUNCAT group headed by J. K. Nørskov.

Peter G. Bruce FRS, FRSE, FRSC, is Wolfson Professor of Materials at the University of Oxford. His research interests embrace materials chemistry and electrochemistry, especially lithium and sodium batteries. Recent efforts have focussed on the synthesis and understanding of nanomaterials for lithium-ion batteries, including nanowire/nanotube intercalation anodes and mesoporous cathodes,  the challenges of the lithium-air battery and the influence of order on the ionic conductivity of polymer electrolytes. His research has been recognised by a number of awards and fellowships, including from the Royal Society, the Royal Society of Chemistry, the German Chemical Society and The Electrochemical Society. He was elected to the Royal Society (UK Academy of Sciences) in 2007 and the Royal Society of Edinburgh (Scottish Academy of Sciences) in 1994.