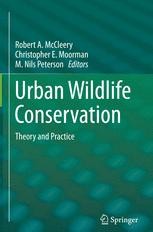 In the past, wildlife living in urban areas were ignored by wildlife professionals and urban planners because cities were perceived as places for people and not for wild animals. Paradoxically, though, many species of wildlife thrive in these built environments. Interactions between humans and wildlife are more frequent in urban areas than any other place on earth and these interactions impact human health, safety and welfare in both positive and negative ways. Although urban wildlife control pest species, pollinate plants and are fun to watch, they also damage property, spread disease and even attack people and pets. In urban areas, the combination of dense human populations, buildings, impermeable surfaces, introduced vegetation, and high concentrations of food, water and pollution alter wildlife populations and communities in ways unseen in more natural environments. For these ecological and practical reasons, researchers and mangers have shown a growing interest in urban wildlife ecology and management.

This growing interest in urban wildlife has inspired many studies on the subject that have yet to be synthesized in a cohesive narrative. Urban Wildlife: Theory and Practice fills this void by synthesizing the latest ecological and social knowledge in the subject area into an interdisciplinary and practical text. This volume provides a foundation for the future growth and understanding of urban wildlife ecology and management by:

• Offering a cohesive understanding of the coupled natural and social drivers that shape urban wildlife ecology,

• Proposing means to create physical and social environments that are mutually beneficial for both humans and wildlife.

Robert (Bob) McCleery is an Assistant Professor in the department of Wildlife Ecology and Conservation Biology at the University of Florida. His research focuses include understanding how wildlife responds to anthropogenic changes to their environment and finding ways to maintain wildlife communities and populations that foster healthy ecosystems. Much of Bob’s work has been centered on mammalian conservation in urbanizing and agricultural landscapes. Bob received his B.S. from Cornell University and M.S. and Ph.D. degrees from Texas A&M University.

Chris Moorman is Professor and Coordinator of the Fisheries, Wildlife and Conservation Biology Program at North Carolina State University (NCSU). His research focuses on global change and wildlife with emphasis on understanding the effects of human-induced landscape change on wildlife habitat. Chris developed the course Urban Wildlife Management at NCSU, published a four-

part extension publication series on backyard and urban wildlife management and led collaborative efforts to create the Going Native website, an interactive resource for those interested in landscaping for wildlife with native plants. Chris received his B.S. and M.S. degrees from the University of Georgia and his Ph.D. from Clemson University.
Show all
Reviews

“This book compiles some 30 years of literature on wildlife in urban areas, including such aspects as the impacts of dense human populations, buildings, and concentrations of food and water. It also considers the social, economic, and political factors relevant to interactions between wildlife and humans. … This valuable, informative book should be on the reference shelves of wildlife biologists and urban planners as well as students in these areas. Summing Up: Recommended. Upper-division undergraduates through professionals/practitioners.” (R. L. Smith, Choice, Vol. 52 (11), July, 2015)