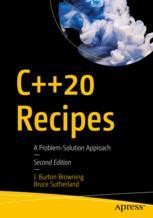 Discover the newest major features of C++20, including modules, concepts, spaceship operators, and smart pointers. This book is a handy code cookbook reference guide that covers the C++ core language standard as well as some of the code templates available in standard template library (STL).

This is a must-have, contemporary reference for your technical library to help with just about any project that involves the C++ programming language.

Programmers with at least some prior experience with C++.

Dr. J. Burton Browning earned his doctorate from North Carolina State University. He has conducted research in areas including: distance learning, programming, and instructional technology. As a life-long learner and someone who has interests in topics such as: programming, photography, robotics, car restoration, wood working, hunting, reading, fishing, and archery, he is never at a loss for something to do. The art and joy of serving as a professor suits his inquisitive nature. Dr. Browning’s previous publications include works on cross-functional learning teams (CFLT), The Utopian School (teacher-led school model), computer programming (several languages), open-source software, healthcare statistics and data mining, CNC plasma cutter operation, educational technology, biography, mobile learning, online teaching, and more.

Bruce Sutherland is a video game programmer hailing from Dundee, Scotland. He graduated with a Bsc (Hons) Computer Games Technology from the University of Abertay, Dundee in Scotland, graduating in 2005. After graduating he began his first job in the games industry at 4J Studios where he worked on Star Trek: Encounters (PS2), The Elder Scrolls IV: Oblivion (PS3), Star Trek: Conquest (PS2, Wii), Ducati Moto (NDS) and AMF Pinbusters! (NDS). In July 2008 he moved from Dundee to Melbourne Australia where he joined Visceral Studios and was a software engineer on Dead Space (Xbox 360, PS3, PC), The Godfather II (Xbox 360, PS3, PC) and Dead Space 3 (Xbox 360, PS3, PC). He developed an interest in developing for Android in his spare time and writes tutorials on his blog.