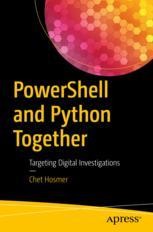 PowerShell and Python Together

Bring together the Python programming language and Microsoft’s PowerShell to address digital investigations and create state-of-the-art solutions for administrators, IT personnel, cyber response teams, and forensic investigators.
You will learn how to join PowerShell's robust set of commands and access to the internals of both the MS Windows desktop and enterprise devices and Python's rich scripting environment allowing for the rapid development of new tools for investigation, automation, and deep analysis.
PowerShell and Python Together takes a practical approach that provides an entry point and level playing field for a wide range of individuals, small companies, researchers, academics, students, and hobbyists to participate.

Chet Hosmer is the founder of Python Forensics, Inc., a non-profit organization focused on the collaborative development of open source investigative technologies using Python and other popular scripting languages. He has been researching and developing technology and training surrounding forensics, digital investigation, and steganography for decades. He has made numerous appearances to discuss emerging cyber threats, including National Public Radio's Kojo Nnamdi show, ABC's Primetime Thursday, and ABC News Australia. He has also been a frequent contributor to technical and news stories relating to cyber security and forensics with IEEE, The New York Times, The Washington Post, Government Computer News, Salon.com, and Wired Magazine.

Chet serves as a visiting professor at Utica College in the cybersecurity graduate program where his research and teaching focus on advanced steganography/data hiding methods and the latest active cyber defense methods and techniques. He also is an adjunct professor at Champlain College, where his research and teaching focus is on applying Python and other scripting languages to solve challenging problems in digital investigation and forensics.