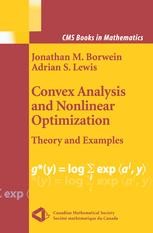 A cornerstone of modern optimization and analysis, convexity pervades applications ranging through engineering and computation to finance.

Jonathan M. Borwein, FRSC is Canada Research Chair in Collaborative Technology at Dalhousie University. A Fellow of the AAAS and a foreign member of the Bulgarian Academy of Science, he received his Doctorate from Oxford in 1974 as a Rhodes Scholar and has worked at Waterloo, Carnegie Mellon and Simon Fraser Universities. Recognition for his extensive publications in optimization, analysis and computational mathematics includes the 1993 Chauvenet prize.

Adrian S. Lewis is a Professor in the School of Operations Research and Industrial Engineering at Cornell. Following his 1987 Doctorate from Cambridge, he has worked at Waterloo and Simon Fraser Universities. He received the 1995 Aisenstadt Prize, from the University of Montreal, and the 2003 Lagrange Prize for Continuous Optimization, from SIAM and the Mathematical Programming Society.

- M.J. Todd, in the International Journal of Robust and Nonlinear Control

"This book represents a tour de force for introducing so many topics of present interest in such a small space and with such clarity and elegance."

"There is a fascinating interweaving of theory and applications..."

"The present book gives a concise treatment of the area, aiming to show the relevance in particular of new developments in nonsmooth analysis to optimization theory…The book is of a manageable size and as such should appeal to the student. Further, the proofs are generally short and snappy, revealing the power of the abstract structural approach and fruitful interplay of geometrical and topological ideas. However, considerable ground is covered and, as a graduate text should, it develops the subject up to the frontiers of current research, giving an idea of areas for further exploration…This text will give impetus to the teaching of analysis because it makes evident its significant applications in optimization. But it will also bring added attraction to the study of optimization because it reveals so much of its abstract structural base."

"The book is divided into 11 chapters and provides a comprehensive presentation of the main features of convex analysis and nonlinear optimisation. Each result is sustained by a set of theorems, propositions and corollaries and includes rigorous proofs and clarifying discussions. They are complemented by a series of theoretical exercises. … This book is warmly recommended for an advanced course in analysis for mathematicians or as a first graduate course for students involved with optimization theory." (Carlos Narciso Bouza Herrera, Zentralblatt MATH, Vol. 1116 (18), 2007)