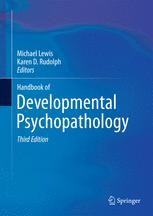 When developmental psychologists set forth the theory that the roots of adult psychopathology could be traced to childhood experience and behavior, the idea quickly took hold. Subsequently, as significant research in this area advanced during the past decade, more sophisticated theory, more accurate research methodologies, and improved replication of empirical findings have been the result.

The Third Edition of the Handbook of Developmental Psychopathology incorporates these research advances throughout its comprehensive, up-to-date examination of this diverse and maturing field. Integrative state-of-the-art models document the complex interplay of risk and protective factors and other variables contributing to normal and pathological development. New and updated chapters describe current refinements in assessment methods and offer the latest research findings from neuroscience. In addition, the Third Edition provides readers with a detailed review across the spectrum of salient topics, from the effects of early deprivation to the impact of puberty.

As the field continues to shift from traditional symptom-based concepts of pathology to a contemporary, dynamic paradigm, the Third Edition addresses such key topics as:

The Third Edition of the Handbook of Developmental Psychopathology is a discipline-defining, forward-looking resource for researchers, clinicians, scientist-practitioners, and graduate students in such fields as developmental psychology, psychiatry, social work, child and school psychology, educational psychology, and pediatrics.<

Michael Lewis, Ph.D., is University Distinguished Professor of Pediatrics and Psychiatry and Director of the Institute for the Study of Child Development at Rutgers Robert Wood Johnson Medical School. He is also Professor of Psychology, Education, and Biomedical Engineering, and currently serves as Founding Director of Rutgers Robert Wood Johnson Medical School’s Autism Center.  He has been the recipient of the Urie Bronfenbrenner Award for Lifetime Contribution to Developmental Psychology in the Service of Science and Society from the American Psychological Association, the Hedi Levenback Pioneer Award from The New York Zero-to-Three Network, and the award for Distinguished Scientific Contributions to Child Development from the Society for Research in Child Development. He is also the author of Shame: The Exposed Self, Altering Fate: Why the Past Does Not Predict the Future, and the soon to be published The Rise of Consciousness and the Development of Emotional Life.

Karen D. Rudolph, Ph.D., is a Professor at the University of Illinois, Urbana-Champaign. She received her doctorate in Clinical Psychology at the University of California, Los Angeles, and completed a clinical internship at the Neuropsychiatric Institute and Hospital at UCLA. She has been a recipient of a William T. Grant Foundation Faculty Scholars Award, a James McKeen Cattell Sabbatical Award, and has served as a PI and Co-PI on several large-scale longitudinal s

tudies funded by the National Institute of Mental Health. She serves on the editorial boards of Development and Psychopathology and the Journal of Abnormal Child Psychology and is an Associate Editor for the Journal of Clinical Child and Adolescent Psychology. Her research focuses on person-by-environment interactions that predict the emergence and continuity of depressive disorders, with a focus on developmental transitions (e.g., puberty, school transitions) that create a context of risk for the onset or exacerbation of psychopathology.
Show all
Reviews