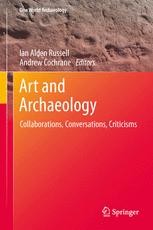 This volume presents a collection of interdisciplinary collaborations between contemporary art, heritage, anthropological, and archaeological practitioners. Departing from the proceedings of the Sixth World Archaeological Congress’s ‘Archaeologies of Art’ theme and Ábhar agus Meon exhibitions, it includes papers by seminal figures as well as experimental work by those who are exploring the application of artistic methods and theory to the practice of archaeology. Art and archaeology: collaborations, conversations, criticisms encourages the creative interplay of various approaches to ‘art’ and ‘archaeology’ so these new modes of expression can contribute to how we understand the world. Established topics such as cave art, monumental architecture and land art will be discussed alongside contemporary video art, performance art and relational arts practices. Here, the parallel roles of artists as makers of new worlds and archaeologists as makers of pasts worlds are brought together to understand the influences of human creativity.

Ian Alden Russell is a curator, designer, and academic based in Istanbul, Turkey. He is an assistant professor of contemporary art and cultural heritage in the Department of Archaeology and Art History at Koç University. Previous to this, he was Curator of the David Winton Bell Gallery at Brown University, and he continues to curate exhibitions of contemporary art by international as well as emerging artists. With an academic background in history, archaeology, and heritage studies, his research engages with artists in galleries, museums, heritage sites, and public spaces to address issues around the constitution of cultural heritage. He is currently co-editing a volume with Michael Shanks (Stanford) and Mike Pearson (Aberystwyth) for Routledge exploring these themes. His previous edited volumes include Images, Representations, and Heritage (Springer: 2006) and Unquiet Pasts (Ashgate: 2010).

Andrew Cochrane is Project Curator at the British Museum. He has excavated with the Museum of London Archaeology, was a World Art Fellow at the University of East Anglia, and has been a Research Fellow at the Sainsbury Institute for the Study of Japanese Arts and Cultures. In 2008, he developed the WAC ‘art and archaeology’ exhibitions and conference with Ian Russell. He has been Project Curator for: The Power of Dogu exhibition (British Museum: 2009), the unearthed exhibition (Sainsbury Centre for Visual Arts: 2010), and the Ice Age Art exhibition (British Museum: 2013). In recent years, Andrew has greatly enjoyed collaborating with Doug Bailey, Jill Cook, Andy Jones and Simon Kaner.

“The Editors have compiled a volume of 15 papers that aim to identify the commonalities between art and archaeology, demonstrate the ways that archaeologists can learn from the practice of visual arts and provide successful examples of these synergies. … The case studies described demonstrate that contemporary arts practices have created new and enriched ways of perceiving material remains and have provided new interpretive models that archaeologists can use to explain the past.” (June Ross, Australian Archaeology, Vol. 80, June, 2015)