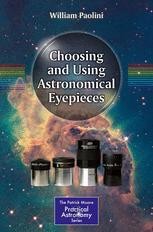 A valuable reference that fills a number of niches including that of a buyer's guide, technical desk reference and observer's field guide. It documents the past market and its evolution, right up to the present day. In addition to appealing to practical astronomers - and potentially saving them money - it is useful both as a historical reference and as a detailed review of the current market place for this bustling astronomical consumer product.

What distinguishes this book from other publications on astronomy is the involvement of observers from all aspects of the astronomical community, and also the major manufacturers of equipment. It not only catalogs the technical aspects of the many modern eyepieces but also documents amateur observer reactions and impressions over the years, using many different eyepieces.

Eyepieces are the most talked-about accessories and collectible items available to the amateur astronomer. No other item of equipment commands such vigorous debate, or has evolved into such a remarkable array of forms and functions. 'Choosing and Using Astronomical Eyepieces' provides a vast amount of reference material to point readers towards the best buys and the right eyepieces for different kinds of observing.

William Paolini has been actively involved in optics and amateur astronomy for 45 years, has published numerous product reviews on major online amateur astronomy boards, and volunteers with public tours at a famous vintage Clark refractor site.

Paolini's professional background is as an officer in the U. S. Air Force and as a computer scientist, holding a Bachelor’s degree in Computer Science and a Master of Science in Education. He has worked for the U. S. Department of Defense, the U. S. Department of Commerce, the Federal Trade Commission, the Federal Reserve, the World Bank, and a variety of commercial corporations in the information technology, information technology security, and telecommunications industries.

Paolini has been observing as an amateur astronomer since the mid-1960's, grinding mirrors for homemade Newtonian telescopes during the 1970's and eventually owning, using, and testing several hundreds of eyepieces in a wide variety of telescopes from achromatic and apochromat refractors to Newtonian, Maksutov-Cassegrain, and Schmidt-Cassegarian designs. Today he enjoys observing from his suburban home west of Washington, D. C., where his primary amateur astronomy pursuits are lunar, planetary, bright nebula, open cluster, and globular cluster observing.