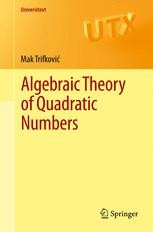 By focusing on quadratic numbers, this advanced undergraduate or master’s level textbook on algebraic number theory is accessible even to students who have yet to learn Galois theory. The techniques of elementary arithmetic, ring theory and linear algebra are shown working together to prove important theorems, such as the unique factorization of ideals and the finiteness of the ideal class group.  The book concludes with two topics particular to quadratic fields: continued fractions and quadratic forms.  The treatment of quadratic forms is somewhat more advanced  than usual, with an emphasis on their connection with ideal classes and a discussion of Bhargava cubes.

The numerous exercises in the text offer the reader hands-on computational experience with elements and ideals in quadratic number fields.  The reader is also asked to fill in the details of proofs and develop extra topics, like the theory of orders.  Prerequisites include elementary number theory and a basic familiarity with ring theory.

Mak Trifković is an assistant professor of mathematics at the University of Victoria.

“This is a first introduction to algebraic number theory for students with a modest background in algebra. … This slim volume is able to convey the beauty and many of the basic notions of algebraic number theory to beginners, which makes it a valuable addition to the literature.” (C. Baxa, Monatshefte für Mathematik, Vol. 180, 2016)

“This text could be used for an undergraduate introduction to algebraic number theory or as augmentation for a more advanced course. The writing is clear, with good motivations for the theory as it is introduced, so students should be able to understand why the theory is developed as it is. … a very nice text, and a student who masters this material would have a solid background from which to do further study in either algebra or number theory.” (Duncan A. Buell, Mathematical Reviews, April, 2014)

“This book presents a smooth introduction to the first principles of algebraic number theory. … The book is very well written, has worked examples and numerous exercises, and should easily accessible to readers with a good background in elementary number theory and the most basic algebraic notions. I highly recommend it to everyone interested in number theory beyond the most basic level.” (Franz Lemmermeyer, zbMATH, Vol. 1280, 2014)

“The central idea of this book is to focus attention solely on quadratic number fields and their rings of integers … . the text intends to bring the subject of algebraic number theory down to the undergraduate level, it succeeds admirably: it is written at a level that should be comprehensible to good undergraduates … . this book is sufficiently different from these other references so as to be considered a fairly novel addition to the existing textbook literature. … an interesting and well-written book.” (Mark Hunacek, MAA Reviews, November, 2013)