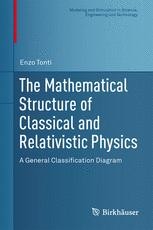 The Mathematical Structure of Classical and Relativistic Physics

The theories describing seemingly unrelated areas of physics have surprising analogies that have aroused the curiosity of scientists and motivated efforts to identify reasons for their existence. Comparative study of physical theories has revealed the presence of a common topological and geometric structure. The Mathematical Structure of Classical and Relativistic Physics is the first book to analyze this structure in depth, thereby exposing the relationship between (a) global physical variables and (b) space and time elements such as points, lines, surfaces, instants, and intervals. Combining this relationship with the inner and outer orientation of space and time allows one to construct a classification diagram for variables, equations, and other theoretical characteristics.

The book is divided into three parts. The first introduces the framework for the above-mentioned classification, methodically developing a geometric and topological formulation applicable to all physical laws and properties; the second applies this formulation to a detailed study of particle dynamics, electromagnetism, deformable solids, fluid dynamics, heat conduction, and gravitation. The third part further analyses the general structure of the classification diagram for variables and equations of physical theories.

Suitable for a diverse audience of physicists, engineers, and mathematicians, The Mathematical Structure of Classical and Relativistic Physics offers a valuable resource for studying the physical world. Written at a level accessible to graduate and advanced undergraduate students in mathematical physics, the book can be used as a research monograph across various areas of physics, engineering and mathematics, and as a supplemental text for a broad range of upper-level scientific coursework.

“The author studies the mathematical structure of classical and relativistic physics with a non-standard approach. … the books can be highly recommended for readers from mathematics, physics and engineering, in particular for readers looking for an alternative approach to classical and relativistic physics.” (Willi-Hans Steeb, zbMATH, Vol. 1298, 2014)