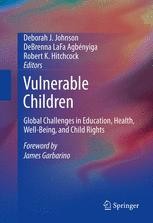 They are laborers, soldiers, refugees, and orphans. In areas of the world torn by poverty, disease, and war, millions of children are invisible victims, deprived of home, family, and basic human rights. Their chances for a stable adult life are extremely slim.

The powerful interdisciplinary volume Vulnerable Children brings a global child-rights perspective to the lives of indigenous, refugee, and minority children in and from crisis-prone regions. Focusing on self-determination, education, security, health, and related issues, an international panel of scholars examines the structural and political sources of children's vulnerabilities and their effects on development. The book analyzes intervention programs currently in place and identifies challenges that must be met at both the community and larger policy levels. These chapters also go a long way to explain the often-blurred line between vulnerability and resilience. Included in the coverage:

Deborah J. Johnson is Professor of Human Development and Family Studies at Michigan State University. Her research on status-based, race, and culturally --related development, parental socialization and parent/child relations in early and middle childhood Much of her work has been in the area of racial/ethnic identity development and racial socialization in varying context including child care principally among African-American and other ethnic children and families, but also internationally with Zimbabwean youth. Her international interests and collaborations also focus on these issues among Sudanese refugee youth and Indigenous youth of Western Australia. Of more than 50 published, books, monographs, articles and chapters, several recent publications have focused on disentangling race, poverty, and culture; theory development in the area of racial-ethnic socialization; and on research methods in cultural communities in American and across the globe. Selected publications include, Johnson, D. J., and Spicer, P. (Eds.), (Special Section, 2009). Racial/Ethnic socialization, identity, and youth outcomes: Excavating culture. Cultural Diversity and Ethnic Minority Psychology,; Slaughter-Defoe, D.T., Stevenson, H., Arrington, E. & Johnson, D.J. (Eds.) (2011)Black Educational Choice: Assessing the Private and Public Alternatives to Traditional K-12 Public Schools;.  Rana, M., Johnson, D.J, & Bates, L.(2011)  Parental Choice and Involvement in the Education of Sudanese Unaccompanied Minors in Black Education Choice volume.  Johnson, D.J. (2012) What's Not in the Box?: Historical and Population Change as Contextual Features in the Study of Race-Based Development of Children, Racial Stereotyping and Child Development; Kickett-Tucker, C. and Johnson, D.J. (2004). Challenges in the Context of the Changing Roles of Nyoongah Women. Family Focus On…International Perspectives..

DeBrenna LaFa Agbényiga, Ph.D., LMSW is Associate Dean for Graduate Studies and Inclusion in the College of Social Science and Associate Professor in Human Development and Family Studies and the School of Social Work at Michigan State University.  Currently, her research looking at international social and economic development spans across issues pertinent to access and sustainability that are linked to the rights of women and children that has been used to inform policies.   In particular, she has addressed issues of child labor, domestic violence, water rights, health disparities, access to education and economic capacity building throughout West Africa and parts of Southern and Eastern Africa.  She continues to explore these issues within an international context with migrant populations from Africa who recently resettled in the US.  She is the co-editor, with Robert Ame and Nana Apt, of Child Rights in Ghana: Reality or Rhetoric (Lexington Books, 2011).  Her recent journal articles focused on, refugee resettlement, gendered immigration, child labor, global climate change linkages to economic stability and education, and organizational culture impact on effective service delivery.  At the national level, she is a part of the Council on Social Work Education governance as the Chair of the Council on External Relations and a member of the Commission on Global Social Work Education.

Robert K. Hitchcock is a Professor of  Geography and Anthropology at Michigan State University. He has worked with San communities in Botswana, Namibia, Zimbabwe, and Zambia since 1975, and he serves on the board of the Kalahari Peoples Fund. He worked for the government of Botswana in the Ministry of Local Government and Lands (1977-79) and Ministry of Agriculture (1980-1982) and has served as a consultant to the Department of Wildlife and National Parks in Botswana. He has also worked for the governments of Somalia, Swaziland, and Lesotho, as well as for the United Nations High Commissioner for Refugees and the World Bank. Books include Kalahari Cattle Posts (Government of Botswana, 1978), Endangered Peoples of Africa and the Middle East: Struggles to Survive and Thrive (co-edited with Alan Osborn, Greenwood, 2002), Indigenous Peoples’ Rights in Southern Africa (co-edited with Diana Vinding, International Work Group for Indigenous Affairs, 2004). He is also the co-editor, with Kazunobu Ikeya, Megan Biesele, and Richard Lee, of Updating the San: Image and Reality of an African People in the 21st Century. Senri Ethnological Studies No. 70 (Osaka, Japan: National Museum of Ethology, 2006). He is the co-author, with Megan Biesele, of the book Ju/’hoan San since Independence: Development, Democracy, and Indigenous Voices in Namibia (Berghan Books, 2009).

"Vulnerable Children: Global Challenges in Education, Health, Well-Being, and Child Rights contains a great deal of useful information and provocative arguments about how to frame the problems faced by children in vulnerable communities and settings... the book is an opportunity for readers to be exposed to groups that do not have the opportunity to obtain enough attention." (Richard Thompson and Elizabeth C. Neilson, PsycCRITIQUES, February 24, 2014, Vol. 59, No. 8, Article 3)