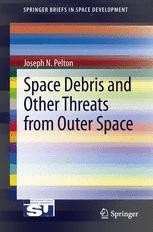 Space Debris and Other Threats from Outer Space

The mounting problem of space debris in low earth orbit and its threat to the operation of application satellites has been increasingly recognized as space activities increase. The efforts of the Inter Agency Space Debris Coordinating Committee (IADC) and UN COPUS have now led to international guidelines to mitigate the creation of new debris. This book discusses the technical studies being developed for active removal processes and otherwise mitigating problems of space debris, particularly in low earth orbit. This book also considers threats to space systems and the Earth that comes from natural causes such as asteroids, coronal mass ejections, and radiation. After more than half a century of space applications and explorations, the time has come to consider ways to provide sustainability for long-term space activities.

Dr. Pelton was the founder of the Arthur C. Clarke Foundation and remains as the Vice Chairman on its Board of Directors. He has been active in the Arlington, Virginia community for many years as President of the Arlington County Civic Federation, as a member of the Long Range Planning Commission that initiated “smart growth” in Arlington and is currently Chairman of the IT Advisory Commission for Arlington County and Chair of the Civic Federation’s Environmental Committee.

Pelton is widely published with some 35 books written, co-authored or co-edited. His Global Talk won the Eugene Emme Literature Award and was nominated for a Pulitzer Prize. He is the co-author of the book Future Cities published by the Intelligent Communities Forum and is currently working on a book called Safe Cities that examines how broadband communications systems can make cities safer and more responsive to the needs of citizens and improve education and health care services. Most of his books are about space, satellite communications, and the future of technology and its impact on society. He is on the Advisory Board of the World Future Society and also frequently speaks and writes as a futurist.