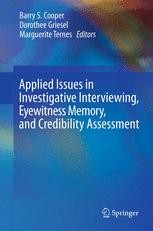 Contingent on funding being available, a Festschrift will be held in honor of Dr. John Yuille’s career as a Forensic Psychologist. He has become one of the most visible and respected Canadian psychologists worldwide. In light of his upcoming retirement in December 2006, the Festschrift will recognize Dr. Yuille’s achievements in the areas of eyewitness memory research (i.e., pioneering a new research paradigm that grants better validity), investigative interviewing (i.e., the development and use of the Step Wise Interview Protocol), and credibility assessment (i.e., introducing Statement Validity Analysis to North America). New directions for future work will be explored at the workshop. The focus of this Festschrift will be three-fold:

1. International. Dr. Yuille’s work has influenced law enforcement practices and stimulated research in and outside of Canada. The international and multicultural aspects of the work that Dr. Yuille has inspired will be reflected and promoted by this workshop.

2. Interdisciplinary. Dr. Yuille is internationally known as an expert, consultant and trainer to law enforcement. As such, Dr. Yuille’s work has also influenced other disciplines, e.g., the law, social work, oral history. The participants of this Festschrift will gain insight into other professionals’ perspectives and foster potential collaborations on future projects.

3. Emphasis on applied research. A hallmark of Dr. Yuille’s research has been the application of field and archival methods, which made his work directly applicable to forensically relevant contexts. The potential future directions of applied forensic research will be discussed at this Festschrift.

The importance of the subject at this time:

- A lack of integrative models in the literatures of eyewitness memory and the assessment of truthfulness and deception. Presenters of the Festschrift have recently developed such models and will discuss them at the Festschrift. Publishing these models and their discussions will spark further research to validate or modify them.

- New, pioneering field research based on such integrative models has recently been conducted. This book would be one of the first publications of the results.

Dr. Barry S. Cooper is a Registered Psychologist in Vancouver, BC, Canada, practicing in the forensic arena. He received an MA and Ph.D. in Forensic Psychology at the University of British Columbia (UBC) where he met and was mentored by Dr. John Yuille. A former Senior Psychologist for the Correctional Service of Canada, Dr. Cooper is a Psychologist for the Forensic Psychiatric Services Commission at the BC Forensic Psychiatric Hospital. He is a Clinical Instructor in the Department of Psychiatry at UBC and an Adjunct Professor in the Departments of Psychology at UBC-Okanagan and Simon Fraser University. In addition, Dr. Cooper is in private practice which involves assessment and consultation services to law enforcement, lawyers, corrections, and the Judiciary. He also a founding Partner and Director of Research and Development for the Forensic Alliance, a research, training, and consulting company headed by Dr. Yuille. Dr. Cooper’s research and clinical-forensic interests include investigative interviewing, eyewitness memory, credibility/malingering assessment, risk assessment and psychopathy. He has provided training to various groups including law enforcement, child protection, mental health professionals, lawyers, corrections, and the judiciary. Dr. Cooper has also provided evidence at BC Review Board hearing and has served as an expert witness in court for both the prosecution and defence.

Dr. Dorothee Griesel belongs to the Gesellschaft für Wissenschaftliche Gerichts- und Rechtspsychologie (GWG) in Munich, Germany - a network of forensic psychologists and psychiatrists. As an expert witness, she provides credibility assessments in the context of criminal law, family law, and compensation claims. In this line of work, she benefits tremendously from her training with Dr. John Yuille. She was first introduced to his research on autobiographical memory for violent events during a practicum in the Forensic Psychology Lab at the University of British Columbia (UBC) in 2001. In 2002, she completed her Diplom in Psychology at Mannheim University in Germany and entered the Ph.D. program in Forensic Psychology at UBC under John’s supervision. She also received training in Counseling Psychology and completed a pre-doctoral internship at the Health and Counseling Centre at Simon Fraser University. Dr. Griesel’s dissertation was a field investigation of sex trade workers’ narratives of sexual violence. She completed her Ph.D. in 2008. In 2007, when John became a Professor Emeritus, she participated in organizing his Festschrift conference at UBC, which set the stage for the present book.

Dr. Marguerite Ternes has worked for the Correctional Service of Canada’s Addictions Research Centre since 2009. Since 2011, she has also been a lecturer of Forensic Psychology at the University of Prince Edward Island. After completing her undergraduate degree at St. Francis Xavier University, she began graduate studies in Forensic Psychology at the University of British Columbia. She completed her Masters in 2003 and her Ph.D. in 2009, both under the supervision of Dr. John Yuille. Mentored by Dr. Yuille, her research interests include autobiographical memory, suggestibility, investigative interviewing, and credibility assessment. Her Masters research investigated eyewitness identification performance in a group of adults with intellectual disabilities, while her dissertation explored verbal credibility in the memory accounts of violent offenders. Dr. Yuille instilled in Dr. Ternes an appreciation for the importance of ecological validity in forensic psychological research, values which Dr. Ternes practices and advocates in her current positions. When Dr. Yuille retired in 2007, she was part of the team that organized a Festschrift conference in his honour, which led to the present volume.