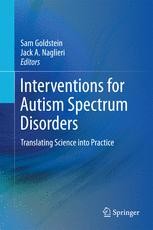 Children are being diagnosed with autism spectrum disorders at a staggering rate—as many as one in 110, according to some studies. To this sobering statistic add the familiar figures of the toddler disengaged from his peers, the middle schooler shunned in the lunchroom, and the adult struggling with social cues on the job, and professionals are faced with a mounting challenge: to assist and support young people with these disorders to ensure their successful transition to adolescence and adulthood.

The first volume dedicated solely to its topic, Interventions for Autism Spectrum Disorders provides a comprehensive overview of programs currently in use. Contributors explore programs focusing on long-term outcomes, home- and classroom-based strategies, resilience training for parents, and pharmacological management of symptoms. Background chapters review issues in reliability and validity of interventions and evaluating treatment effectiveness. And an especially cogent chapter discusses the centrality of treatment integrity to best practice. Comprehensive programs and targeted interventions covered include:

Interventions for Autism Spectrum Disorders is an essential resource for researchers, professionals/practitioners, and clinicians in a wide array of fields, including clinical child, school, and developmental psychology; child and adolescent psychiatry; education; rehabilitation medicine/therapy; social work; and pediatrics.

Sam Goldstein, Ph.D., is a doctoral level psychologist with areas of study in school psychology, child development, and neuropsychology. He is licensed as a psychologist and certified as a developmental disabilities evaluator in the State of Utah. Dr. Goldstein is a Fellow in the National Academy of Neuropsychology and American Academy of Cerebral Palsy and Developmental Medicine. Dr. Goldstein is an Assistant Clinical Instructor in the Department of Psychiatry. Since 1980, Dr. Goldstein has worked in a private practice setting as the Director of a multidisciplinary team, providing evaluation, case management, and treatment services for children and adults with histories of neurological disease and trauma, learning disability, adjustment difficulties, and attention deficit disorder. Dr. Goldstein is on staff at the University Neuropsychiatric Institute. He has served as a member of the Children’s Hospital Craniofacial Team. He has also been a member of the Developmental Disabilities Clinic in the Department of Psychiatry at the University of Utah Medical School.

Dr. Goldstein has authored, co-authored or edited 38 clinical and trade publications, including 17 text books dealing with managing children's behavior in the classroom, genetics, attention disorder and adult learning disabilities. With Barbara Ingersoll, Ph.D., he has co-authored texts dealing with controversial treatments for children’s learning and attention problems and childhood depression. With Anne Teeter Ellison, he has authored Clinician’s Guide to Adult ADHD: Assessment and Intervention. With Nancy Mather, Ph.D., he has completed 3 texts for teachers and parents concerning behavioral and educational issues. With Michael Goldstein, M.D., he has completed two texts on attention deficit hyperactivity disorder. He has edited 3 texts with Cecil Reynolds, Ph.D., on neurodevelopmental and genetic disorders in children. With Robert Brooks, Ph.D., he has authored 11 texts including, Handbook of Resilience in Children, Understanding and Managing Children’s Classroom Behavior – 2nd Edition, Raising Resilient Children, Nurturing Resilience in Our Children, Seven Steps to Help Children Worry Less, Seven Steps to Anger Management, The Power of Resilience, Raising a Self-Disciplined Child and Raising Resilient Children with Autism Spectrum Disorders. With Jack Naglieri and Sally Ozonoff, Ph.D., he has authored a number of texts on autism, assessment of Intelligence and Executive Functioning. He has co-authored a parent training program and is currently completing a number of additional texts on resilience, ADHD and genetics. Dr. Goldstein is the Editor-in-Chief of the Journal of Attention Disorders and serves on 7 Editorial Boards. He is also the Co-Editor of the Encyclopedia of Child Development and Behavior.

Dr. Goldstein, a knowledgeable and entertaining speaker, has lectured extensively on a national and international basis to thousands of professionals and parents concerning attention disorders in children, resilience, depression, adjustment and developmental impairments, autism, and assessment of brain dysfunction.

Jack A. Naglieri, Ph.D., is a Research Professor at the University of Virginia, Senior Research Scientist at the Devereux Center for Resilient Children, and Emeritus Professor of Psychology at George Mason University. He is a Fellow of APA Divisions 15 and 16 and recipient of APA Division 16 Senior Scientist Award (2001). He earned degrees in school psychology from St. John's University (1975) and worked as a school psychologist in Bethpage, New York from 1975 to 1977. He obtained his Ph.D. in Educational Psychology from the University of Georgia in 1979, taught school psychology at Northern Arizona University (1979-1982), The Ohio State University (1982 to 2000), and George Mason University (2000-2010). Dr. Naglieri's main interest is in the development of psychological and educational tests and the implications these approaches have for diagnosis and academic or emotional interventions.

In summary, Dr. Naglieri has an extensive research program that includes scholarly research, books, and psychological tests with an emphasis on uniting sound theory with scientific practice.

“This book, the first of its kind to my knowledge, presents the current understanding of the evaluation, treatment, and diagnosis of patients with autism spectrum disorders. ... The audience includes clinicians, psychologists, and therapists working with this patient population. … I highly recommend this to anyone in the field of mental health.” (Sundeep S. Randhawa, Doody’s Book Reviews, March, 2015)

“This overview of psychological interventions currently available for management of children with autism spectrum disorders provides brief information about various programs that include applied behavior analysis along with the current evidence for these models while acknowledging the need for future research. … a useful resource for parents or caregivers of children with autism. … As a compilation of currently practiced models for autism spectrum disorder management, this book is valuable as a reference.” (Seleena M. Shrestha, Doody’s Book Reviews, August, 2013)