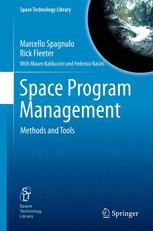 Beginning with the basic elements that differentiate space programs from other management challenges, Space Program Management explains through theory and example of real programs from around the world, the philosophical and technical tools needed to successfully manage large, technically complex space programs both in the government and commercial environment. Chapters address both systems and configuration management, the management of risk, estimation, measurement and control of both funding and the program schedule, and the structure of the aerospace industry worldwide.

Marcello Spagnulo, graduated in Aeronautical Engineering, has been a space professional since the mid 1980s. After many years working in major space programs, first at the European Space Agency - European Space Research and Technology Centre (ESA-ESTEC) in Noordwijk, the Netherlands, and then at the Arianespace French consortium in Evry. In French Guyana, he joined Alenia Space Italia (now Thales Alenia Space) and Finmeccanica SpA in Rome covering various management roles. He now works at the Italian Space Agency as Staff of the President. Spagnulo has written over 50 scientific papers and publications, two books on space exploration history and astronomy, and a professional book on space program management. He teaches space systems engineering at the Universities La Sapienza and Tor Vergata in Rome and he also teaches professional courses on space systems at the Masters in Space Policy SIOI of the Italian Foreign Affairs Minister.

Rick Fleeter, graduated in Aerospace Propulsion Engineering, has also been a  space professional since the early 1980s. He founded and was CEO of the first company in the U.S. dedicated to small, low-cost spacecraft, from 1988 to 2008. He has written the only two books on microspace, Micro Space Craft (The Edge City Press, 1992) and The Logic of Mircospace (Springer, 2000). After many years working in major space programs, having developed 24 small spacecraft, he escaped to the small satellite environment. He now teaches space systems engineering, design and technology transfer at Brown University in Providence, Rhode Island and at University La Sapienza in Rome, Italy. Fleeter also works at the Italian Space Agency (ASI) as a consultant. He teaches professional courses worldwide on small space and space program management, and he continues to behave as if small spacecraft can and should take over the world.

Federico Nasini is in charge of the Finance and Insurance Department at Thales Alenia Space Italia Sp.A., where he has worked since 1998, holding several positions at the financial department. Prior to joining Thales Alenia Space, he worked as a export and project finance manager at Finmeccanica S.p.A., the main Italian industrial group operating globally in the aerospace, defense, and security domain. After graduating in Political Science at La Sapienza University of Rome, he earned a degree in Corporate Finance at the London School of Economics and attended the Credit Risk Evaluation School at I.R.I Management school. He has experience in trade, export, and project finance techniques both in the domestic and international domain. He holds seminars at the Unversity of Cheti-Pescara, G. D'Annunzio and SIOI - Societa Italiana per l'Organizzazione Internazionale, and he is the author of several papers focusing on project financing techniques applied at the Space business.

Mauro Balduccini graduated in Nuclear Engineering at the Rome University "La Sapienza," started his professional activity at the end of the 1970's, in the Stress Analysis department of the former Breda Termomeccanica (now Ansaldo), then he moved to the former BPD SpA (now Avio SpaA) as design responsible for space propulsion systems, then as Program Manager for propulsion and control stages. Later working at the former Alenia Spazio (now Thales Alenia Space) he was platform responsible for the SICRAL1 military Satellite and System manager of ITALSAT2 communication satellite. Back in Avio in the 1990's, he held the responsibility of the Cyclone4 Launcher modernization program, and then he was the first General Manager of the ELV company (Avio 70%, ASI 30%) for the ESAVega Launcher Development Program. He is now at Avio Space Division. He participated in several specific international technical teams (Ariane 501 failure investigation tech support team) and he holds seminars and courses at the University "La Spaienza" in Rome.