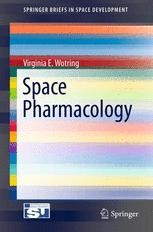 “Space Pharmacology” is a review of the current knowledge regarding the use of pharmaceuticals during spaceflights. It is a comprehensive review of the literature, addressing each area of pharmacokinetics and each major physiological system in turn. Every section begins with a topic overview, and is followed by a discussion of published data from spaceflight, and from ground experiments meant to model the spaceflight situation. Includes a discussion looking forward to the new medical challenges we are likely to face on longer duration exploration missions. This book is a snapshot of our current knowledge that also highlights areas of unknown.

Dr. Virginia Wotring is a Senior Scientist in the Division of Space Life Sciences at Universities Space Research Association, and Pharmacology Discipline Lead at NASA's Johnson Space Center, Human Health and Countermeasures. She received her doctorate in Pharmacological and Physiological Sciences at Saint Louis University after earning a BS in Chemistry at Florida State University. She has extensive experience studying drug mechanisms of action, drug receptor structure/function relationships, and gene and protein expression.

In 2009, she began directing the NASA JSC Pharmacology Lab, whose mission is to ensure that medications used during spaceflight will act in a predictable, effective and safe manner. The spaceflight environment includes several unusual stressors for the body: microgravity, fluid shifting, increased radiation exposure, lack of circadian cues and others. Each of these can alter normal physiology, and thus, change the way in which drugs are absorbed, distributed, metabolized, excreted or how they interact with physiological targets. Current projects include: determining cardiac safety of new and experimental anti-motion sickness combination therapies, and measurement of gene and protein expression after exposure to spaceflight or a gamma radiation analog of spaceflight.

Dr. Wotring is also actively involved in mentoring students and interns, and participates in teaching at area universities. She holds adjunct appointments in the UTMB Galveston Department of Pharmacology and Toxicology and at the University of Houston's Department of Health and Human Performance.