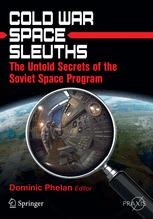 The Untold Secrets of the Soviet Space Program

“Space Sleuths of the Cold War” relates for the first time the inside story of the amateur spies who monitored the Soviet space program during the Cold War. It is written by many of those “space sleuths” themselves and chronicles the key moments in their discovery of hidden history. This book shows that dedicated observers were often better than professionals at interpreting that information coming out of the USSR during the dark days of the Cold War. This book takes a unique approach to the history of Soviet spaceflight – looking at the personal stories of some of the researchers as well as the space secrets the Soviets tried to keep hidden. The fascinating account often reads like a Cold War espionage novel.

“Space Sleuths of the Cold War” includes an impressive list of contributors, such as: Editor Dominic Phelan, giving an overall history of the Cold War hunt for Soviet space secrets. Space writer Brian Harvey reveals his own personal search through official Soviet radio and magazines to find out what they were (and weren’t) revealing to the outside world at the height of the space race. Sven Grahn from Sweden details his own 40 year quest to understand what was happening on the other side of the Iron Curtain. Professional American historian Asif Siddiqi explores his own adventures in the once secret Russian archives – often seeing documents never before read by Westerners. Dutch cosmonaut researcher Bert Vis provides an inside account of the Yuri Gagarin training center in Moscow. Belgian researcher Bart Hendrickx’s  details his important translation of the 1960s’ diaries of cosmonaut team leader General Kamanin. Pioneer space sleuth James Oberg’s shares his memories of his own notable ‘scoops.' Paris-based writer Christian Lardier recounts the efforts of French space sleuths – whose work was frequently overlooked in the USA and Britain because of the language barrier.

Phillip Clark was born in Bradford, Yorkshire, in 1950 and became interested in spaceflight after listening to the early NASA manned missions at school. He focused on Soviet spaceflight at the time of the Apollo 11 mission and began corresponding with Geoffrey Perry of the Kettering Group. Clark has an Open University (OU) degree in mathematics and computing, and pioneered the use of computer analysis to uncover the roles of obscure Soviet and Western reconnaissance satellites from their orbits. For many years he was a space consultant for the BBC and is the author of the 1988 book The Soviet Manned Space Programme. He currently lives in Hastings, England.

Sven Grahn is from Stockholm, Sweden, and as a teenager helped launch sounding rockets from the Kronogard rocket base. He holds a master's in engineering physics and joined the Swedish Space Corporation in 1975. Grahn was the project manager for Sweden's first microgravity project (a module for the German TEXUS rocket) first launched in 1977, deputy project manager for Sweden's first satellite VIKING (launched in 1986), and engineering manager for the first satellite entirely designed and integrated in Sweden - the FREJA magnetospheric satellite launched by China in October 1992. From 1993 until 2001 he headed to a Swedish Space Corporation team designing sounds rocket payloads, balloon gondolas and small satellites. Between 2001-2006 he was Senior Vice-President of Engineering at the corporation.

Brian Harvey is a writer, broadcaster and journalist based in Dublin, Ireland. He has a degree in history and political science from Dublin University (Trinity College) and a masters in economic and social history from University College Dublin. His first space book, Race into Space (Ellis Horwood, 1988), was a history of the Soviet space programme. He has since written histories of a number of the world's space powers, paying close attention to China. His Russian Space Probes (co-authored with Olga Zakutnyaya, Springer-Praxis 2011) is a history of Russian and Soviet space science.

Bart Hendrickx was born in Kapellen, Belgium, in 1964. An early fascination with Russian spaceflight developed into an interest in the language. He has a Masters in Dutch-English-Russian translation in 1986. Hendrickx is a full-time language teacher at the University of Ghent. He has written extensively on the history of the Soviet space programme, primarily based on the Russian-language sources. He is co-author (with Bert Vis; Springer-Praxis, 2007) of a history of the Soviet space shuttle.

Christian Lardier was born in France in 1952 and joined the Cosmos Club de France aged nineteen. Now a professional journalist, he has been the space editor of Air & Cosmos magazine since 1994. He is also a senior member of the Association Aeronautique et Astronautique de France, co-founder of Association Planet Mars, co-founder and president since 2007 of the Institut Francais d'Histoire de l'Espace, and a member of the history committee of International Academy of Astronautics.

James Oberg was born in New York in 1944, and in 1969 got a Masters in applied mathematics from Northwestern University. After service with the US Air Force he joined NASA in 1975 and worked at the Johnson Space Center until 1997. As a child 'space nuts,' Sputnik inspired his early private study of Soviet spaceflight, an interest later encouraged by mentors such as Charles Sheldon of the Congressional Research Service. He became one of the original sleuths in his spare time after writing dozens of articles, authoring the ground-breaking book Red Star in Orbit and circulating a sleuthing newsletter called Cosmogram. At JSC he was an orbital rendezvous mission controller, receiving professional awards for his work relating to the ISS orbit. He has authored ten books and is currently a consultant for NBC News, which recently took him to North Korea's secret launch site. He lives in rural Texas with his wife Alcestis ('Cooky') Oberg, herself a published author.

Dominic Phelan was born in Dublin, Ireland, in 1972. After gaining a qualification as a journalist in 1996 he worked as a freelance writer with features published in The Irish Times, The Irish Independent and History Ireland.  His articles on the history of astronomy and spaceflight have appeared in Spaceflight and Astronomy Now, and he contributed an 11,000-word chapter on Soviet lunar plans during the Moon Race for Footprints in the Dust (University of Nebraska Press, 2010). He has traveled to Moscow and written about Russian medical preparations for a manned Mars mission that was used in Space Exploration 2008 (Springer-Praxis, 2008). He has attended the annual BIS Soviet Forum since 1993.

David Shayler was born in Birmingham, England, in 1955. His interest in space was kindled while at school. He trained as an engineering draughtsman, then joined the Royal Marines. On returning to civilian life in the late 1970s he worked in various retail management roles before going full-time as a space promoter with his company Astro Information Service in 1999. As part of a drive to promote 'space education' amongst the public, he has given several hundred lectures and is the author of over twenty spaceflight books. He is a Fellow of the British Interplanetary Society and co-founder of the Midland Spaceflight Society. He lives in the West Midlands with his wife Bel.

Asif Siddiqi is the author of Challenge to Apollo: The Soviet Union and the Space Race, 1945-1974 (NASA History Office, 2000), the first comprehensive work on the history of Soviet spaceflight to be published after the opening of the former Soviet archives. He was the series editor of Boris Chertok's four volume Rockets and People memoir published in English between 2004 and 2012 by NASA, and he authored The Red Rockets' Glare: Spaceflight and the Soviet Imagination, 1857-1957 (Cambridge University Press, 2010). He is currently Associate Professor of History at Fordham University in New York. In 2013-2014 he will serve as the Charles A. Lindbergh Chair in Aerospace History at Smithsonian's National Air & Space Museum in Washington D.C.

Bert Vis is from Voorburg in The Netherlands and was born in 1955. His interest in manned spaceflight began with the launch of Apollo 7, and by the mid-1970s he was corresponding with NASA astronauts and Soviet cosmonauts seeking information on their careers. Since the 1980s he has visited the USA and Russia on an almost annual basis and is also a regular at the Association of Space Explorers congress. In addition to articles for Dutch and international space publications, he has contributed to two editions of Who's Who in Space, written a chapter for Fallen Astronauts (University Nebraska Press, 2003), and co-authored Russia's Cosmonauts (Springer-Praxis, 2005) and Energiya-Buran (Springer-Praxis, 2007). Vis served as a firefighter in The Hague for thirty-three years and is now employed by the Haaglanden Regional Fire Department as a policy advisor.

Claude Wachtel was born in Paris in 1951. He studied space geophysics at Pierre and Marie Curie University in Paris and joined the staff of the Meudon Observatory, where he works on the results of experiments carried on satellites. He has a doctorate in space geophysics and has worked in the Geodynamics and Astronomy Study and Research Centre in Grasse, South of France. In 1978 he went to work in the French Prime Minister's office on risk contingency planning and crisis management. He has organized expeditions to the Arctic, holds an aerobatics qualification, and gained the Legion d'honneur in 1987.

“A network of amateur sleuths, scattered throughout the world, attempted to penetrate the veil of secrecy and eventually succeeded. ‘Cold War Space Sleuths: The Untold Secrets of the Soviet Space Program,’ edited by Dominic Phelan, tells their stories. … For those interested in space history and the space race, ‘Cold War Space Sleuths’ will offer a fresh and innovative perspective. It recaptures the excitement of the era through the eyes of enthusiastic researchers.” (Mark Lardas, The Galveston County Daily News, March, 2013)

“This book … is a fascinating collection of memories of space sleuths, those self-defined individuals who throughout the Cold War era (and beyond) became dedicated amateur observers of the Soviet space program. … For anyone interested in space history, this provides a detailed overview of those tenacious individuals at the end of the 20th century who dedicated their lives to opening up information for the general public.” (James T. Andrews, Quest: The History of Spaceflight, Vol. 20 (3), 2013)