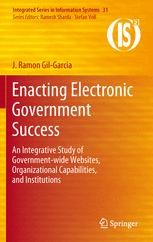 An Integrative Study of Government-wide Websites, Organizational Capabilities, and Institutions

Theoretically, the book proposes a way to quantitatively operationalize Fountain’s enactment framework. Based on the institutional tradition, the technology enactment framework attempts to explain the effects of organizational forms and institutional arrangements on the information technology used by government agencies. According to Fountain (1995; 2001) the technology enactment framework pays attention to the relationships among information technology, organizations, embeddedness, and institutions. This framework is very well known in the e-government field, but is normally used for qualitative analysis and there is no previous proposal of how to use it with quantitative data. The book proposes variables to measure each of the different constructs in this framework and also tests the relationships hypothesized by Fountain’s theory. Finally, using the advantages of the selected quantitative analysis technique (Partial Least Squares), the study also proposes some adjustments and extensions to the original framework in a theory building effort.

Methodologically, the book reports on one of the first multi-method studies in the field of e-government in general and e-government success in particular. This study uses a nested research design, which combines statistical analysis with two in depth case studies. The study begins with a statistical analysis using organizational, institutional, and contextual factors as the independent variables. An overall score representing e-government success in terms of the functionality of state websites is the dependent variable. Second, based on the statistical results two cases are selected based on their relative fitness to the model (residuals) and their position in the general ranking of website functionality (which includes four different measures). In order to complement the results of the statistical analysis, case studies were developed for the two selected states (New York and Indiana), using semi-structured interviews and document analysis. In terms of the statistical analysis, the book constitutes one of the first applications of Partial Least Squares (PLS) to an e-government success study. PLS is a structural equations modeling (SEM) technique and, therefore, allows estimating the measurement model and the structural model simultaneously. The use of this sophisticated statistical strategy helped to test the relationships between e-government success and different factors influencing it, as well as some of the relationships between several of the factors, thus allowing exploring some indirect effects too.

“Enacting Electronic Government Success can be considered a reference book for U.S. state officials who seek to understand how best to evaluate the positive and negative aspects of their e-government strategy. … This highly useful book presents an integrative framework to evaluate e-government initiatives. … This readable and comprehensive book is a genuine service to public administrators present and future, who hope to thoughtfully advance government service delivery into the information age.” (Sehl Mellouli, Public Administration Review, Vol. 47 (2), 2014)

“Ramon Gil-Garcia has authored a first-class book about electronic government (e-government), and one that will inspire scholars for years. … This book is an integrative contribution to the emergent e-government research community and fulfils some of the existing pitfalls in the discipline. … The audiences of this book will find it useful both in the academic and practical realms. … Future research using this Enacting Electronic Government Success model may be developed.” (J. Ignacio Criado, Information Polity, Vol. 18, 2014)