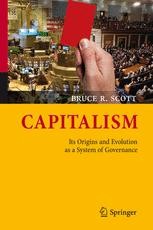 Its Origins and Evolution as a System of Governance

Two systems of governance, capitalism and democracy, prevail in the world today. Operating in partly overlapping domains, these systems influence and transform each other, but the nature of this interaction is often misunderstood -- largely because capitalism has not been recognized as a system of governance. Rejecting the simple definition "capitalism = actions of firms in markets," Harvard's Bruce R. Scott offers instead a conception of capitalism as a three-level system akin to organized sports, in which games (markets) are conducted according to rules administered by referees (regulators), which in turn are shaped and directed by sports' governing bodies (political authorities).

Tracing the evolution of capitalism from a variety of perspectives, Scott shows how governance has always been key to the system. Historically, capitalism was not a natural outgrowth of trade; it could not have emerged without political authorization for the creation of markets for land, labor, and capital. Urgently needing funds for military defense, regimes ceded some power to a new class of economic actors, spelling out their rights and responsibilities with corporate charters. The United States Constitution was anomalous in reserving to individual states the power to grant such charters, with the result that states compete to offer firms the least regulation. The Constitution also gave exceptional powers to the Supreme Court, which has interpreted the Constitution as mandating laissez-faire policies.

It is impossible to adequately understand capitalism without understanding the role played by governance. This book challenges the notion of a "universal" model of capitalism, particularly one based on the US system, and illuminates the broader frameworks upon which markets depend.

Professor Bruce Scott spent his entire professional career at Harvard Business School, except for 5 years spent with an affiliated school in Switzerland.   During that Swiss interval, in the 1960s, he researched the role of French national planning on its industrial sector.  This research played a significant role in the subsequent decision by the French government to discontinue its “indicative planning” for industry.  At the same time it also reoriented all his subsequent work to the study of economic governance and economic strategies of nations as contrasted with firms.  The fruits of that new orientation were first published by Springer Verlag in 2009 as a monograph called The Concept of Capitalism, and subsequently in its entirety as a 700 page book, also by Springer, called Capitalism, its Origins and Evolution as a System of Governance. Professor Scott made an abbreviated presentation of his ideas on the relationship between capitalism and democracy in the nation building process in the Libyan context at a TEDX meeting in Tripoli in February, 2012, a presentation which was attended by the Deputy Prime Minister and a number of cabinet members and which was taped for reuse by the TED organization.

Professor Scott is scheduled to teach a full semester course called Capitalism as a System of Governance at Harvard Extension School beginning in January 2013 (http://www.extension.harvard.edu/courses/capitalism-system-governance) .  A full description of the course is available through the Extension School, including day by day reading assignments and suggested study questions.  The course is built around readings from two primary sources; Capitalism, by Professor Scott, and Why Nations Fail, by Daron Acemoglu and James Robinson (published by Crown Business).  The basic thesis of the course is that capitalism has emerged only where limited monarchy and the rule of law have already prevailed, and thus with generally inclusive and therefore egalitarian institutions.  Thus capitalism seems to date to Venice circa 1200.  The basically complementary thesis of Acemoglu and Robinson is that “extractive” institutions and oppressive governance have characterized the failures.      Acemoglu and Robinson argue that the first notable example of inclusive and relatively egalitarian institutions dates to England and its “glorious revolution” of 1688-89, which paved the way for the industrial revolution and economic progress.  Capitalism is not featured in their account.

Professor Scott presents the development of capitalism as a political process, the result of conflicts among social actors, with capitalists and government officials as the main actors. While focused on the United States, this book has the great merit of showing that American capitalism was a contingent and not inevitable outcome, and that different balances of forces and different circumstances created distinct varieties of capitalism in other countries and historical moments. This book’s insights deserve careful consideration from historians, social scientists, and all those who address economic issues in the political realm.

Richard Lachmann,
Professor of Sociology
College of Arts and Sciences
University at Albany