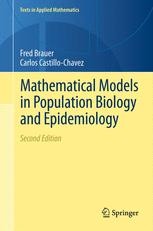 This textbook provides an introduction to the field of mathematical biology through the integration of classical applications in ecology with more recent applications to epidemiology, particularly in the context of spread of infectious diseases. It integrates modeling, mathematics, and applications in a semi-rigorous way, stating theoretical results and giving references but not necessarily giving detailed proofs, providing a solid introduction to the field to undergraduates (junior and senior level), graduate students in applied mathematics, ecology, epidemiology or evolutionary biology, sustainability scientists, and to researchers who must routinely read the practical and theoretical results that come from modeling in ecology and epidemiology.

This new edition has been updated throughout. In particular the chapters on epidemiology have been updated and extended considerably, and there is a new chapter on spatially structured populations that incorporates dispersal. The number of problems has been increased and the number of projects has more than doubled, in particular those stressing connections to data.  In addition some examples, exercises, and projects include use of Maple and Matlab.

"A strength of the book is the large  number of biologically-motivated problem sets. These and the references to the original biological papers would be valuable resources for an instructor." (UK Nonlinear News, 2001)

"The work provides an easily accessible, but concise introduction to the subject. Both graduate students and professionals will find the book an understandable, absorbing, and penetrating treatment of a beautiful theory."

"This book is aimed at biological-science students but it deserves a wider audience. The range of examples included makes it a good read for mathematically-literate non-biologists. Science and engineering students could also read this book and it could be a good text for a biomathematics course…The authors’ approach of not getting stuck in theory makes this book easier to read…A strength of the book is the large number of biologically-motivated problem sets. These and the references to the original biological papers would be valuable resources for an instructor. The book was written as a textbook but anyone who is curious about mathematical biology would benefit from reading it. There is enough theory to prevent the book from being trivial and the emphasis on applications carries the reader into unexpected territory."

"…on close examination the presentation has a number of distinguishing features. First, the authors carefully discuss the underling assumptions of each model and, where appropriate, illustrate their points with real data. Second, the authors extend the discussion of discrete time maps to include systems of difference equations. Third, the authors provide very convincing arguments for the inclusion of time delays in models for population growth. Finally, the chapter on the effects of harvesting on the growth of populations would be an excellent addition to an undergraduate course in mathematical economics. This textbook is user friendly and at times captivating. At first look students may be slightly intimidated since the text contains a lot of equations. However they will soon be delighted to see that number of equation is because the authors show all of the steps in the derivations. Moreover the authors increase the relevance of this text by carefully discussing the underlying assumptions of each model and by placing the model in its proper historical context…A textbook on biomathematics must overcome two major hurdles: (1) convince biologists that the mathematics is useful in a way that is accessible to them; and (2) convince mathematicians that the topic is not trivial and hence worthy of their time. This text gets a ‘two thumbs up’."

"The organization within each subsection is incredibly thorough, gradually adding mathematical twists to each previous equation or model. Biological examples are provided if and when they relate to a given equation and the examples are highly idealized…this books format is also reasonable for a survey of applied mathematics because the format facilitates comparison across fields of biology…There is some very useful information within this book."

"It is a useful book which gives a good introduction to the modelling of biology and some other similar fields. ... This book gives and discusses many continuous and discrete models from population dynamics, epidemiology, and resource management. A large number and variety of examples, exercises are included. The book is warmly recommended to undergraduate and graduate students as well as to scientists in mathematical or biological sciences." (József Terjéki, Acta Scientiarum Mathematicarum, Vol. 69, 2003)

"There are some jewels in this text ... . This book is intended for the student who has had a year of calculus, some background in elementary differential equations, and a little matrix theory. ... There is some very useful information within this book. The book includes problems, ‘projects, an in-book appendix, and a future on-line appendix. Answers are provided for some but not all problems, to encourage students to become involved and not just be spectators." (Janet Foley, Ecology, Vol. 83 (1), 2002)

"The role of mathematics in ecology and epidemiology has had a long history ... The current volume focuses on this interface between mathematics and biology. ... The book is written in the theorem proof style that mathematicians will feel comfortable with. ... The succinct and clear section on mathematical epidemiology is one of the highlights of the book. ... There are extensive problems throughout the text; these are all essentially mathematical exercises. ... the book does present advanced mathematical ideas quite clearly." (Alan Hastings, The Quarterly Review of Biology, Vol. 77 (3), 2002)

"This book is aimed at biological-science students but it deserves a wider audience. The range of examples included makes it a good read for mathematically-literate non-biologists. ... A strength of the book is the large number of biologically-motivated problem sets. These and the references to the original biological papers would be valuable resources for an instructor. The book was written as a textbook but anyone who is curious about mathematical biology would benefit from reading it." (Geoffrey Aldis, UK Nonlinear News, August, 2001)