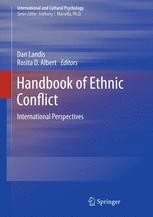 Although group conflict is hardly new, the last decade has seen a proliferation of conflicts engaging intrastate ethnic groups. It is estimated that two-thirds of violent conflicts being fought each year in every part of the globe including North America are ethnic conflicts. Unlike traditional warfare, civilians comprise more than 80 percent of the casualties, and the economic and psychological impact on survivors is often so devastating that some experts believe that ethnic conflict is the most destabilizing force in the post-Cold War world. Although these conflicts also have political, economic, and other causes, the purpose of this volume is to develop a psychological understanding of ethnic warfare. More specifically, Handbook of Ethnopolitical Conflict explores the function of ethnic, religious, and national identities in intergroup conflict. In addition, it features recommendations for policy makers with the intention to reduce or ameliorate the occurrences and consequences of these conflicts worldwide.

"The William B. Gudykunst Outstanding Book Award, 2013, goes to Dan Landis and Rosita Albert for their extraordinary achievement in editing the Handbook of Ethnic Conflict: International Perspectives.  We members of the Selection Committee--Young Kim, Cookie Stephan, and David Sam—unanimously agree that, of the six books nominated, this Handbook of Ethnic Conflict is clearly the most worthy as the first recipient of this special award.  Dan and Rosita took on an intellectually ambitious project of presenting 20 original chapters, in which ethnic conflict is examined in varying historical, cultural, and sociopolitical contexts of 20 different countries or regions around the world.  The highly informative chapters offer population-specific insights, with which to examine and refine existing theories or to generate new ways of theorizing about the nature of interethnic conflict.  For this reason, we, committee members, applaud Dan Landis and Rosita Albert for a significant contribution they have made to a better understanding of intercultural relations, in general, and of ethnic conflict, in particular."
Jan Pieter van Oudenhoven
President of the IAIR

"The Handbook of Ethnic Conflict embraces the critical focal mission of expanding our understanding of ethnic conflict by demonstrating both the regional diversity of conflict and the deep historical roots of these conflicts. The volume, like no other I have read, examines ethnic conflict on a global basis. Its chapters describe ethnic conflicts in The Pacific Rim, South East Asia, China, Latin America, Eastern Mediterranean, the Balkans, and Europe. The chapters demonstrate both unique and shared characteristics of the conflicts and illustrate how existing theories can (and cannot) be applied to understand the conflicts. This allows the reader to compare and contrast the conflicts, and determine how existing theories can be applied to understand each conflict. In addition to this region diversity, the chapters also trace the history of each conflict. The reader not only learns that the conflicts are not “modern” events, but also understands how these conflicts become imbedded in the narrative of each ethnic group, thereby contributing to their resistance to “resolution”. This insight is critical because most existing theories of ethnic conflict give little attention to the role of history in intergroup conflict and violence...The Handbook of Ethnic Conflict: International Perspectives is unique in its diversity of scope, demonstrating the complex roots of ethnic conflict that conspire to its vitality and resistance to resolution. The volume is an important and timely contribution to the literature on ethnic conflict. It is based on a well-conceived plan and achieves it important objectives. It is timely and its contribution will be timeless. It deserves the recognition offered by the William B. Gudykunst Outstanding Book Award."
(Stephen Worchel, Professor Emeritus, University of Hawaii at Hilo, February 22, 2013)

"When I first read Dan’s latest book, The Handbook of Ethnic Conflict, it blew me away.  It is a comprehensive guide to a topic in social psychology that is crucially important, both in a theoretical and practical sense.  Dan has always been a leader in cross-cultural research and this text is an example of the originality of his insights and opportunities he and his work offer for the advancement of intercultural research.  Dan is a fine scientist and it shows up in the strength of his logic and data.
It is my opinion, supported by other independent reviews that this book meets and exceeds the criteria for the Gudykunst award.  The various chapters have been selected to allow significant theoretical, practical and genralizable conclusions to be drawn about a problem that has, and will continue, to bedevil the world's cultures. If Bill's work stood for anything, it was to find ways to reduce the friction between individuals with differing cultural backgrounds. Dan's book shows that even when those differences have deterorated into violence there are ways that evidence based approaches can be used to bring ethnic groups together and that ignoring those techniques and approaches can have results which are too horrible to contemplate...For all of these reasons, I strongly support the awarding of the Gudylunst prize to the Handbook of Ethnic Conflict: International Perspectives."
(Elaine Hatfield, Ph.D., University of Hawai'i, February 12, 2013)

"Not a handbook, but a library, and, an essential collection of over twenty studies providing the history and dynamics of ethnic conflicts in eight arenas around the world, along with documenting the theories of conflict resolution and their efficacy. For interculturalists, this is both overwhelming and challenging."
(George F. Simmons, Cote d'Azur, France, Amazon review, July 2, 2012)

"For the past 20 years, I regularly have taught a course titled Comparative Race and Ethnic Relations. Its focus is on ethnic and racial conflict and nation building in eight selected foreign countries plus the United States. Over the years, my major complaint has been that precious few books exist that promote or even facilitate a comprehensive, interdisciplinary approach for the discussion of existing geopolitically intergroup conflicts. I believe Dan Landis and Rosita D. Albert’s Handbook of Ethnic Conflict: International Perspectives clearly fills that much needed void. For me, it contains a perfect balance of large and small national case studies that may possibly negatively impact the globe for the next 50 plus years. Of special interest to me are the chapters on the Balkan nations, China, Israel, Mexico, India, and the Philippines. From a sociological perspective, this volume is as valuable as the once underappreciated Chester L. Hunt and Lewis Walker’s 1978 classic, Ethnic Dynamics: Patterns of Intergroup Relations in Various Societies. Since the Balkans’ debacle, Hunt and Walker’s work is far more appreciated; but unfortunately outdated.
I believe the Landis volume, given its inclusion of policy recommendations that are grounded in meticulously sound methodology and theory, soon will become the standard for the study of international conflict and conflict resolution well into the future. The overall conceptualization and organization of the book are masterful, substantial, and authoritative. Hence, I further believe that it is an excellent tool for enhancing graduate and undergraduate student critical thinking skills. It currently represent the best materials I have seen for challenging students to critically think and conceive of social reality of geopolitical communal conflict as a multidimensional construction and deconstruction of self, roles, statuses, and meanings within environments of structured inequality. It is a timely work for educating younger generations to adapt to the rapidly changing, global dynamics of the 21st Century. With his latest work, Professor Landis continues his track record of academic excellence and original contributions to enhancing our knowledge and understanding of the world in which we live."
(Bruce B. Williams, Fletcher Jones Professor, Of Sociology, and Academic Director, Summer Academic Workshop, February 22, 2013)

"Its entire 22 chapters center on ethnic conflict – surely one of the most vital and urgent issues for intercultural work as well as for world peace.   Each chapter surveys ethnic tensions in an array of nations – from the Pacific Rim, China and Southeast Asia to the Balkans, Spain and Latin America.  Intensely researched ethnic conflicts – such racial tensions in the United States and South Africa - are excluded in favor of rarely studied, but crucially important, conflicts.  Indeed, this feature is where this Handbook proves more useful than the array of other Handbooks and Encyclopedia that have been published in social science in recent years.  Other such volumes have focused on simply reviewing and integrating already published research.  While this is accomplished in this volume, it is the new perspectives and ideas featured in many of the chapters that truly set this volume apart."
(Thomas F. Pettigrew, Research Professor of Social Psychology, University of California, Santa Cruz, February 25, 2013)

"This Handbook will have the same significance as the publication in 1980 of the “Handbook of Cross cultural Psychology” which Lee Cronbach credited with starting cross-cultural psychology as a distinct discipline in psychology. I expect that this Handbook will start a distinct discipline of research on ethnic conflict  within intercultural research...The contributors of the Handbook are from 18 countries and their academic backgrounds come from the full range of social science disciplines. The Handbook is full of original ideas from multiple perspectives. Its intercultural focus, interdisciplinary nature, breadth of coverage--from different parts of the world—the diversity of conflicts covered ,the outstanding theory and conclusion chapters make this a monumental work that will be consulted for many years to come."
(Harry C. Triandis, Professor Emeritus of Psychology, University of Illinois in Champaign-Urbana, February 27, 2013)

"Landis and Albert do a fine job in unpacking the Race and ethnicity on their own two terms that provide a great deal of confusion for many people...Landis and Albert were wise to select chapters for their book that would not confuse readers by using dated racial terms, terms that might be considered offensive or politically charged terms...Of particular note is the book's attention to social justice and human rights...The chapter's in Landis and Albert are impressively researched and well written. This reviewer enjoyed reading each of them over several months...the Landis and Albert volume is a worthwhile read that will create some worthwhile and much needed debates on what leads to ethnic conflict."
(Reviewer: Richard Gregory Johnson III, University of San Francisco, Published in Equality, Diversity and Inclusion: An International Journal, Volume 33, Issue 6)