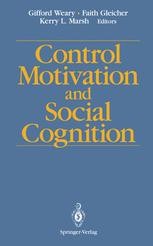 Over the past two decades theorists and researchers have given increasing attention to the effects, both beneficial and harmful, of various control­ related motivations and beliefs. People's notions of how much personal control they have or desire to have over important events in their lives have been used to explain a host of performance and adaptational outcomes, including motivational and performance deficits associated with learned helplessness (Abramson, Seligman, & Teasdale, 1978) and depression (Abramson, Metalsky, & Alloy, 1989), adaptation to aging (Baltes & Baltes, 1986; Rodin, 1986), cardiovascular disease (Matthews, 1982), cancer (Sklar & Anisman, 1979), increased reports of physical symptoms (Pennebaker, 1982), enhanced learning (Savage, Perlmutter, & Monty, 1979), achievement-related behaviors (Dweck & Licht, 1980; Ryckman, 1979), and post abortion adjustment (Mueller & Major, 1989). The notion that control motivation plays a fundamental role in a variety of basic, social psychological processes also has a long historical tradition. A number of theorists (Heider, 1958; Jones & Davis, 1965; Kelley, 1967), for example, have suggested that causal inferences arise from a desire to render the social world predictable and controllable. Similarly, control has been implicated as an important mediator of cognitive dissonance (Wicklund & Brehm, 1976) and attitude phenomena (Brehm & Brehm, 1981; Kiesler, Collins, & Miller, 1969). Despite the apparent centrality of control motivation to a variety of social psychological phenomena, until recently there has been relatively little research explicitly concerned with the effects of control motivation on the cognitive processes underlying such phenomena (cf.