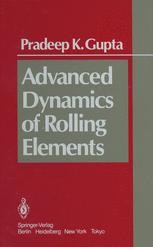 In any rotating machinery system, the bearing has traditionally been a crit­ ical member of the entire system, since it is the component that permits the relative motion between the stationary and moving parts. Depending on the application, a number of different bearing types have been used, such as oil-lubricated hydrodynamic bearings, gas bearings, magnetic suspensions, rolling element bearings, etc. Hydrodynamic bearings can provide any desired load support, but they are limited in stiffness and the associated power loss may be quite large. Gas bearings are used for high-precision applications where the supported loads are relatively light, bearing power losses are very low, and the rotating speeds generally high. For super­ precision components where no frictional dissipation or bearing power loss can be tolerated, magnetic suspensions are employed; again, the load support requirements are very low. Rolling element bearings have been widely used for those applications that require greater bearing versatility, due to the requirements for high-load and high-stiffness characteristics, while allowing moderate power loss and permitting variable speeds. A study of the dynamic interaction of rolling elements is, therefore, the subject of this text. Texts covering the analysis and design methodology of rolling elements are very limited. Notable works include Analysis of Stresses and Deflections (Jones, 1946, Vols. I and II), Ball and Roller Bearings, Their Theory, Design and Application (Eschmann, Hasbargen, and Weigand, 1958), Ball and Roller Bearing Engineering (Palmgren, 1959, 3rd ed. ), Advanced Bearing Technology (Bisson and Anderson, 1965), and Rolling Bearing Analysis (Harris, 1966).