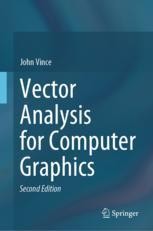 This second edition has been completely restructured, resulting in a compelling description of vector analysis from its first appearance as a byproduct of Hamilton’s quaternions to the use of vectors in solving geometric problems.  The result provides readers from different backgrounds with a complete introduction to vector analysis. The author shows why vectors are so useful and how it is possible to develop analytical skills in manipulating vector algebra.

Using over 150 full-colour illustrations, the author demonstrates in worked examples how this relatively young branch of mathematics has become a powerful and central tool in describing and solving a wide range of geometric problems. These may be in the form of lines, surfaces and volumes, which may touch, collide, intersect, or create shadows upon complex surfaces.

Professor John Vince began working in computer graphics at Middlesex Polytechnic in 1968. His research activities centered on computer animation software and resulted in the PICASO and PRISM animation systems. Whilst at Middlesex, he designed the UK’s first MSc course in Computer Graphics and developed a popular program of short courses in computer animation for television designers. In 1986 he joined Rediffusion Simulation as a Research Consultant and worked on the development of real-time computer systems for commercial flight simulators. In 1992 he was appointed Chief Scientist of Thomson Training Simulation Ltd. In 1995 he was appointed Professor of Digital Media at the National Centre for Computer Animation at Bournemouth University and in 1999 he was made Head of Academic Group for Computer Animation. He was awarded a DSc by Brunel University in recognition of his work in computer graphics. He has written and edited over 45 books on computer graphics, computer animation, computer science and virtual reality, including the following Springer titles:

• Expanding the Frontiers of Visual Analytics and Visualization (2012)

• Geometric Algebra: An Algebraic System for Computer Animation and Games (2009)