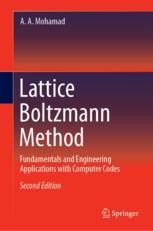 This book introduces readers to the lattice Boltzmann method (LBM) for solving transport phenomena – flow, heat and mass transfer – in a systematic way. Providing explanatory computer codes throughout the book, the author guides readers through many practical examples, such as:

• forced flow through a heated channel;

Diffusion and advection–diffusion equations are discussed, together with applications and examples, and complete computer codes accompany the sections on single and multi-relaxation-time methods. The codes are written in MatLab. However, the codes are written in a way that can be easily converted to other languages, such as FORTRANm Python, Julia, etc. The codes can also be extended with little effort to multi-phase and multi-physics, provided the physics of the respective problem are known.

The second edition of this book adds new chapters, and includes new theory and applications. It discusses a wealth of practical examples, and explains LBM in connection with various engineering topics, especially the transport of mass, momentum, energy and molecular species.

This book offers a useful and easy-to-follow guide for readers with some prior experience with advanced mathematics and physics, and will be of interest to all researchers and other readers who wish to learn how to apply LBM to engineering and industrial problems. It can also be used as a textbook for advanced undergraduate or graduate courses on computational transport phenomena

Professor Abdulmajeed Mohamad is a faculty member at the Schulich School of Engineering, University of Calgary, Canada. He graduated from Baghdad University with a B.Sc. (Hons) and M.Sc. in 1976 and 1978, respectively and subsequently worked as a lecturer at Mosul University until 1985. In 1992, he received his Ph.D. degree from Purdue University, where he was mentored by Professor Raymond Viskanta. Here, he learned the importance of freedom as a fundamental concept of curiosity, which eventually blossoms into new ideas. This lesson was, and still is, evident in his professional work.

In 1993, he became an Assistant Professor at Eastern Mediterranean University, North Cyprus. In September 1999 Professor Mohamad and his family immigrated to Canada, and in 2000 he joined the faculty of the University of Calgary and eventually became a tenured faculty member.

While on leave from the University of Calgary during the period 2010–2012, he served as the acting Dean of Engineering at Alfaisal University (AU), Kingdom of Saudi Arabia, and was instrumental in establishing the university’s Engineering School.

Professor Mohamad is a Fellow of the American Society of Mechanical Engineers (ASME) and an Executive Member of the Scientific Council for the International Centre for Heat and Mass Transfer (ICHMT).

His contributions on the fundamentals of heat transfer, computational methods of incompressible flow, transport and combustion in porous media are well recognized by his peers. Professor Mohamad has authored over 250 papers, mainly in peer-reviewed journals, as well as a popular textbook on the Lattice Boltzmann Method – Fundamentals and Engineering Applications with Computer Codes, which was published by Springer in 2011. He was honored with the Averroes Award (ICOME17 meeting, July 2017) for his contributions to the education of many students around the world.