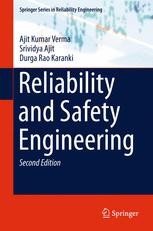 Reliability and safety are core issues that must be addressed throughout the life cycle of engineering systems. Reliability and Safety Engineering presents an overview of the basic concepts, together with simple and practical illustrations.

Reliability and Safety Engineering combines discussions of the existing literature on basic concepts and applications with state-of-the-art methods used in reliability and risk assessment of engineering systems. It is designed to assist practicing engineers, students and researchers in the areas of reliability engineering and risk analysis.

Dr. Durga Rao Karanki has been working as a Scientist at Paul Scherrer Institute, Switzerland since 2009. His current research primarily focuses on dynamic risk assessment and uncertainty propagation. He is a visiting faculty at KINGS, Ulsan, South Korea and Indian Institute of Technology Kharagpur. He is on the editorial board of three international journals in the area of reliability and risk analysis. He has actively been involved in probabilistic safety assessment and risk informed decision-making research on nuclear reactors for the last 12 years. His research resulted in more than 50 publications including 2 books, 12 first author journal papers, and several conference papers. One of his works got into the list of most cited Reliability Engineering and System Safety articles (2013 and 2014). He received two awards (2009, 2012) for research Excellency from Society for Reliability Engineering, Quality and Operations Management (SREQOM), New Delhi.

Prior to joining PSI, he worked as a Scientific Officer (2002- 2009) in PSA Section of Bhabha Atomic Research Centre (Mumbai, India), where he conducted research on Dynamic Fault Tree Analysis, Uncertainty Analysis, and Risk Informed Decision Making. He was also a visiting faculty at Department of Atomic Energy (India) training schools. He holds B.Tech in Electrical and Electronics Engineering from the Nagarjuna University (India), M.Tech in Reliability Engineering from the Indian Institute of Technology (IIT) Kharagpur and Ph.D. from the IIT Bombay.