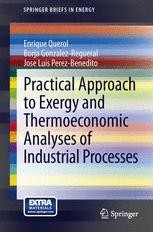 Practical Approach to Exergy and Thermoeconomic Analyses of Industrial Processes

Although the exergy method has been featured as the subject of many publishing papers in scientific and engineering journals and at conferences, very few comprehensive books on this subject have been published so far. Practical Approach to Exergy and Thermoeconomic Analyses of Industrial Processes details the exergetic and thermoeconomic analyses of industrial processes using Aspen Plus and a novel Microsoft Excel Application developed by the authors which can be applied to industrial processes across the board.

Employing a practical approach to an innovative and complex energy process, every chapter contains extensive explanations of a complex and real case and numerous examples whose solution demonstrates the application of theory to a wide range of real and practical problems. Illustrations, tables and graphs support and illustrate the new methodology to build a deep understanding of the real employment of the fuel used and the cost formation and increase inside the process.

Practical Approach to Exergy and Thermoeconomic Analyses of Industrial Processes  provides users, students and practitioners of process analysis, power plant design and fuel use optimization, with a broad introduction and approach to computer aided process optimization. It also serves as a comprehensive guide to the operational application of the MHBT to real cases analysis.

Enrique Querol. He earned his Mining Engineer degree with major in energy and fuels in 1999 and his Ph.D. degree in 2004 from the Technical University of Madrid (UPM). Professor at the Mining School of Madrid since 2002, has been working in the area of “Thermoeconomic analysis and optimization” closely with Prof. José M. Montes. He has published several articles on exergy and thermoeconomics applied to LNG, as part of a Ph.D thesis that he has directed and concluded in 2010. Currently he is Lecturer at the UPM for the grade and Master degree of Energy Engineering in subjects related to Thermoeconomics and fuel gases. He directs several theses on energy, all related to efficient use of energy and fuels. His investigation line is currently focused on energy efficiency (making use of exergy and thermoeconomics), and the improvement of processes related to the life cycle of fuels: storage, transport, liquefaction, regasification, distribution and use.

Borja González-Regueral. He earned his Mining Engineer degree with major in Energy and Fuels in 2003 and his Ph.D. degree in 2010 from the Technical University of Madrid (U.P.M). His thesis, directed by Prof. Enrique Querol, on the use of the cryogenic exergy of LNG was awarded in 2011 by the Spanish Royal Academy of Doctors. He earned a Master Degree in the Electricity Power Industry in 2008 from the Comillas Pontificial University (I.C.A.I.) focusing his Master thesis on the opening to competition of the natural gas, electricity and telecommunications sectors. Since 2003, he has been working in the energy sector in different areas such as LNG receiving terminals, the introduction of a new agent in the natural gas sector, electricity and natural gas national and international regulation and the strategic integration of international utilities. He has coauthored several papers on Exergy and Thermoeconomics applied to LNG receiving plants and the use of the LNG cold exergy. He has actively participated and promoted a new start-up focused on the industrial application of the cold exergy of LNG and thermoeconomical efficiency applied to industrial processes using cold.

Jose Luis Perez-Benedito. He earned his Mining Engineer degree with major in Energy and Fuels in 1999 and his Ph.D. degree in Mechanical Engineering from the Technical University of Madrid (U.P.M) in 2006. Since 2007 he is Associate Professor of Mechanical Design in the Department of Aerospace Vehicles in the School of Aeronautics and Space Engineering (U.P.M). His research line focuses on Computer Graphics Simulation and Mechanical Design.