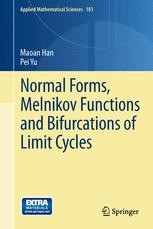 Dynamical system theory has developed rapidly over the past fifty years. It is a subject upon which the theory of limit cycles has a significant impact for both theoretical advances and practical solutions to problems. Hopf bifurcation from a center or a focus  is integral to the theory of bifurcation of limit cycles, for which normal form theory is a central tool. Although Hopf bifurcation has been studied for more than half a century, and normal form theory for over 100 years, efficient computation in this area is still a challenge with implications for Hilbert’s 16th problem.

This book introduces the most recent developments in this field and provides major advances in fundamental theory of limit cycles. Split into two parts, the first focuses on  the study of limit cycles bifurcating from Hopf singularity using normal form theory with later application to Hilbert’s 16th problem, while the second considers near Hamiltonian systems using Melnikov function as the main mathematical tool.

Classic topics with new results are presented in a clear and concise manner and are accompanied by the liberal use of illustrations throughout. Containing a wealth of examples and structured algorithms that are treated in detail, a good balance between theoretical and applied topics is demonstrated. By including complete Maple programs within the text, this book also enables the reader to reconstruct the majority of formulas provided, facilitating the use of concrete models for study.

Through the adoption of an elementary and practical approach, this book will be of use to graduate mathematics students wishing to study the theory of limit cycles as well as scientists, across a number of disciplines, with an interest in the applications of periodic behavior.

“This monograph written by excellent specialists in the fundamental theory of limit cycles represents an introduction to the most new developments and systematical presentation of major advances in this field which come mainly from the authors' own recent research results. … Classic topics with recent results are presented in a clear and concise manner that will be suitable for post-graduate students studying the theory of limit cycles as well as for scientists interesting in the applications of periodic behavior.” (Alexander Grin, Zentralblatt MATH, Vol. 1252, 2012)

“This excellent book advances the theory of Limit Cycles–isolated periodic orbits that are sometimes referred to as self-sustained oscillations in the literature. … This book stands out with worked-out examples galore and efficient and accessible algorithms on classical subjects … . The authors aim at shedding new light on ‘old’ settled results as well as introducing recent advances in the field. The book achieves both handsomely, through a highly readable and convincing exposition that harnesses the power of modern computational tools … .” (Bourama Toni, Mathematical Reviews, January, 2013)