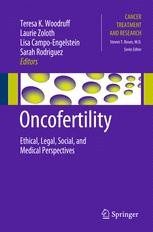 Oncofertility has emerged as a way to address potential lost or impaired fertility in those with a history of cancer. Active biomedical research is developing new ways to help those afflicted with cancer to preserve their ability to have biological children. Oncofertility: Ethical, Legal, Social, and Medical Perspectives moves beyond oncofertility as a science and medical technology and begins to address the social, legal, and ethical ramifications of this emerging field. Dr. Teresa K. Woodruff establishes a team of oncologists, fertility specialists, social scientists, and education and policy makers to engage in an interdisciplinary discussion on the clinical care of women who will lose their fertility due to cancer treatment. "Cancer and its treatment will often compromise fertility. Concerns relevant to reproduction remains one of the most important issues for patients. In this text renown experts discuss the spectrum of critical issues embraced by Oncofertility." - Steven T. Rosen, M.D. Series Editor

Teresa Woodruff, Ph.D. – Teresa K. Woodruff, Ph.D. is a Thomas J. Watkins Professor of Obstetrics & Gynecology at the Northwestern University Feinberg School of Medicine and Professor of Biochemistry, Molecular Biology and Cell Biology in the Weinberg College of Arts and Sciences. She is the Chief of a newly created Division of Fertility Preservation and the Founder and Director of the Institute for Women’s Health Research. She is the immediate past Director of the Basic Science Programs for the Robert H. Lurie Comprehensive Cancer Center (2000-2007). She is the basic science Associate Editor for Fertility and Sterility (2008-present) and member of several editorial boards including Molecular Cellular Endocrinology, Journal of Molecular Endocrinology and Endocrine Reviews. She serves on the Endocrine Society council (2008-present) and the Society for the Study of Reproduction Board of Directors (2008-present). Her awards include the Distinguished Teaching Award from Northwestern University, the Endocrine Society’s Richard E. Weitzman Memorial Award, The Alumae Award from Northwestern University, and the Distinguished Women in Medicine and Science Award. She was elected a fellow of the American Association for the Advancement of Science in 2005. As a member of the faculty of the Undergraduate Program in Biological Sciences, Dr. Woodruff teaches graduate and undergraduate students in Systems Physiology and the medical student module on female reproduction. She also created the Oncofertility Saturday Academy (OSA) to provide science experiences to high school girls attending the Young Women’s Leadership Charter School (YWLCS). She received her PhD from Northwestern University in 1989. Dr. Woodruff has published more than 100 peer-reviewed papers as well as 40 editorials and book chapters. She is the Principal Investigator on 2 R01 NIH grants, a P01 grant and core facility, and is the PI and director of two NIH funded center grants (The Center for Reproductive Research (U54) and the Oncofertility Consortium (UL1). In 2008 she was the recipient of a prestigious W.M. Keck Foundation Medical Research award (2008). The major goals of her laboratory are to identify the mechanisms underlying ovarian follicle development, selection and recruitment and to provide new angles on ovarian disease and fertility conserving options for women. Dr. Woodruff has established a team of oncologists, fertility specialists, social scientists, and education and policy makers to translate her research to the clinical care of women who will lose their fertility due to cancer treatment. She coined the term oncofertility to describe this work, a word that is now officially recognized as a new 'slang' term in the English language. She edited the first book on this topic called Oncofertility (Springer, 2007) where the scope of the problem and current technology, clinical practice tables, procedural guidelines and patient stories are collected. Hallmarks of Woodruff career include a strong focus on ovarian biology, on interdisciplinary approaches to problems and application of the work to the human. Laurie Zoloth, Ph.D. – Laurie Zoloth is a Professor of Medical Humanities, Bioethics, Jewish Studies and Religion. She is also the Director of the Northwestern University Center for Bioethics, Science and Society, and Director of the Brady Program for Ethics and Civic Life, in the Weinberg College of Arts and Sciences. In 2009 she was appointed as the Charles Deering McCormick Professor for Excellence in Teaching. Lisa Campo-Engelstein, Ph.D. – Senior Research Fellow, Oncofertility Consortium and Center for Bioethics, Science and Society Sarah Rodriguez, Ph.D. – Senior Research Fellow, Oncofertility Consortium and Center for Bioethics, Science and Society

“This is a much-needed book on the multidisciplinary and multifaceted world of oncofertility. … book is appropriate for a wide-ranging audience, from patients to practitioners, researchers to clinicians, students to teachers, in all the fields related to oncofertility. … This book is useful for all who work in any aspect of cancer, infertility, research in these areas, or any area related to fertility preservation.” (Amber R. Cooper, Doody’s Review Service, November, 2010)