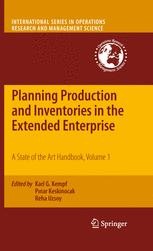 Planning Production and Inventories in the Extended Enterprise

A State of the Art Handbook, Volume 1

Karl G. Kempf is an Intel Fellow and director of Decision Engineering for the Intel Architecture Group at Intel Corporation. He currently focuses on product design and development decision problems, and previously was responsible for supply chain decision problems in Intel's Technology and Manufacturing Group. Kempf joined Intel in 1987 and is based in Phoenix, Arizona. He has been involved in designing and implementing decision policies for production scheduling, equipment maintenance, factory ramp management, equipment selection and layout, strategic and tactical production planning, inventory planning, demand forecasting, logistics operations and product design, as well as a wide variety of modeling and simulation projects. He has produced more than 50 internal publications. Kempf is a member of the National Academy of Engineering. He serves as adjunct professor at Arizona State University supervising graduate students in Mathematics, Computer Science, Industrial Engineering, and Supply Chain Management. Kempf has published more than 100 research papers in the external literature on various topics in heuristic and mathematical decision science, and has delivered keynote addresses at a number of national and international conferences. Prior to joining Intel, Kempf worked at McDonnell Douglas Corporation in St. Louis, Missouri, and Huntington Beach, California, where he was a member of the team that won the contract for automating the initial National Aeronautics and Space Administration Space Station. He worked previously at Pinewood Movie Studios in England where he participated in filming three Superman movies, serving on the team that won an Academy Award for special effects. While working for Ferrari in Italy (on loan from Goodyear), he was involved in winning three Formula I Gran Prix World Championships. Kempf holds a B.S. in Chemistry, a B.A. in Physics, a Ph.D. in Applied Mathematics, and completed post-doctoral studies in Computer Science. Pınar Keskinocak is an associate professor in the School of Industrial and Systems Engineering and the co-founder and co-director of the Center for Humanitarian Logistics at Georgia Institute of Technology. She also serves as the Associate Director for Research at the Health Systems Institute at Georgia Tech. Her research focuses on applications of operations research and management science with societal impact (particularly health and humanitarian applications), supply chain management, pricing and revenue management, and logistics/transportation. She has worked on projects in several industries including automotive, semiconductor, paper manufacturing, printing, healthcare, hotels, and airlines. Her research has been published in journals such as Operations Research, Management Science, Manufacturing & Service Operations Management, Production and Operations Management, IIE Transactions, Naval Research Logistics, and Interfaces. Reha Uzsoy is a professor in the Edward P. Fitts department of Industrial & Systems Engineering at North Carolina State University. He is the author of one book, an edited book, and over seventy refereed journal publications. Before coming to the US he worked as a production engineer with Arcelik AS, a major appliance manufacturer in Istanbul, Turkey. He has also worked as a visiting researcher at Intel Corporation and IC Delco. His research has been supported by the National Science Foundation, Intel Corporation, Hitachi Semiconductor, Harris Corporation, Kimberly Clark, Union Pacific, Ascension Health and General Motors. He was named a Fellow of the Institute of Industrial Engineers in 2005, Outstanding Young Industrial Engineer in Education in 1997 and a University Faculty Fellow by Purdue University in 2001, and has received awards for both undergraduate and graduate teaching. He is currently serving on the Editorial Boards of IIE Transactions on Scheduling and Logistics and International Journal of Computer-Integrated Manufacturing.

“A handbook on this topic is a valuable resource for academics and practitioners who want to access information or research a related topic. … The objective is to bridge the gap between quantitative academic research on decision support models and algorithms and the practical needs of industry. The book achieves this by giving a state-of-the-art overview of theory, methodologies, modeling approaches, and industrial practices, and by identifying gaps that future should address. … Volume 1 summarize historical and recent challenges.”­­­ (Stefan Minner, Interfaces, Vol. 41 (5), September-October, 2011)