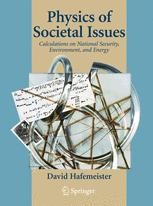 Why this book on the Physics of Societal Issues?  The subdivisions of physics - nuclear physics, particle physics, condensed-matter physics, biophysics - have their textbooks, while the subdivision of physics and society lacks an equation-oriented text on the physics of arms, energy and the environment.  Physics of Societal Issues is intended for undergraduate and doctoral students who may work on applied topics, or who simply want to know why things are the way they are.  Decisions guiding policies on nuclear arms, energy and the environment often seem mysterious and contradictory.  What is the science behind the deployment of MIRVed ICBMs, the quest for space-based beam weapons, the fear of powerline EM fields, the wholesale acceptance of SUVs, the issues of climactic change, and the failure of the pre-embargo market to produce buildings and appliances that now save over 50 power plants?  Physics of Societal Issues is three "mini-texts" in one:

"Straightforward calculations and supporting analysis can significantly shape public policy. This insight is needed in Congress and the Executive Branch. Hafemeister, a former Congressional fellow with wide Washington experience, has written a book for physicists, chemists and engineers who want to learn science and policy on weapons, energy, and the environment. Scientists who want to make a difference will want this book."

"Hafemeister shows how much one can understand about nuclear weapons and missile issues through simple back-of-the-envelope calculations. He also provides compact explanations of the partially successful attempts that have been made over the past 60 years to control these weapons of mass destruction. Hopefully, Physics of Societal Issues will help interest a new generation of physicists in continuing this work."

"Energy policy must be quantitative. People who don't calculate economic trade-offs often champion simplistic hardware. ‘The solution is more .... nuclear power, or electric cars, or photovoltaics, etc.’ Some simple physics will show that the true solution matches supply and demand as an ‘integrated resource plan.’ Physics of Societal Issues is a good place to begin this journey."

David Hafemeister is Professor (emeritus) of Physics at California Polytechnic State University. He has also had an impressive career in Washington as a Professional Staff Member:

Study Director at the National Academy of Sciences (2000-02)

He has edited nine books, published more than 140 articles and was awarded the APS Szilard award in 1996.