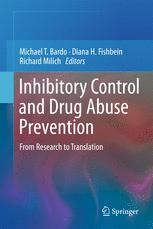 From Research to Translation

Inhibitory Control and Drug Abuse Prevention From Research to Translation Michael T. Bardo, Diana H. Fishbein, Richard Milich, editors Some of the most promising findings about drug abuse come from research into behavioral inhibitory control processes—specifically, that individuals with substance use disorders have inhibitory control deficiencies compared to non-abusers, and that the impulsivity associated with adolescence may account for young people’s vulnerability toward drug-taking behavior. But while this neurobiological approach has steadily influenced the treatment of addiction, it has had only minor effect on prevention efforts. Inhibitory Control and Drug Abuse Prevention was compiled to help correct this situation, synthesizing what we know about the neuromechanics of risk-taking, and mining its ample potential in addiction prevention. Noted experts review up-to-date neurobehavioral studies regarding inhibitory control in humans and laboratory animals, discuss their implications for age groups at risk for impulse control deficits or dysfunction, and apply these findings to the development of innovative, effective prevention strategies. Among the topics covered in this multidisciplinary volume: • Genetic and environmental determinants of risk-taking behavior. • Impaired inhibitory control as a mechanism in drug abuse. • Childhood inhibitory control deficits and risk for substance use. • Social influence in inhibitory control. • Translating research into advocacy and policy. • Targeting anti-drug public service messages to sensation-seeking youth. Inhibitory Control and Drug Abuse Prevention represents a sea change in understanding addictive behavior, and is timely reading for researchers and practitioners in the fields of drug abuse (as well as related high-risk behaviors, e.g., delinquency, unsafe sex, gambling), health psychology, and neuropsychology.

Michael Bardo, Ph.D. is professor of psychology and director of the NIDA-funded Center for Drug Abuse Research Translation (CDART) at the University of Kentucky. He currently teaches at both the undergraduate and graduate levels, and maintains a research laboratory investigating the biological bases of drug abuse. His laboratory is primarily interested in understanding the basic neuropharmacological mechanisms that underlie drug abuse vulnerability using laboratory animals. He is a fellow of the Association for Psychological Science and a member of the Society for Neuroscience, American Psychological Association Division 28, Midwestern Psychological Association, Society for Prevention Research, New York Academy of Sciences, and is active on the editorial board of numerous pharmacology, neuroscience, and psychology journals.

Diana Fishbein, Ph.D. is Senior Fellow in behavioral neuroscience and directs the Transdisciplinary Behavioral Science Program at RTI. She began her career as professor of criminology at the University of Baltimore and as a scientific investigator at the University of Maryland Medical School and subsequently the National Institute on Drug Abuse, the Department of Justice, and the University of Maryland HIDTA Program. Dr. Fishbein consults with federal, state, and local agencies for purposes of expert witnessing in criminal court, training, technical assistance, scientific peer reviews, and development of research protocols. She publishes regularly in her field and is primary author of two textbooks, The Dynamics of Drug Abuse and Biobehavioral Perspectives in Criminology, and editor of two volumes of The Science, Treatment, and Prevention of Antisocial Behavior.

Richard Milich, Ph.D. is a professor of psychology and administrative director of the Center for Drug Abuse Research Translation (CDART) at the University of Kentucky. His primary research interests are childhood behavior problems (especially attention deficit hyperactivity disorder and conduct disorder) and predictors of long-term drug use. He is administrative director of the university’s NHIDA funded Drug Prevention Center. His primary clinical interests are in the area of disordered child behavior. He received the 2007 Kentucky Psychological Association Outstanding Mentor Award, the 2004 William Sturgill Award from the University of Kentucky, and the Division 53 of APA award for outstanding graduate student mentoring. He is a Fellow of APA Divisions 12 and 53. He is active on the editorial boards of several journals, including Journal of Abnormal Child Psychology, Journal of Abnormal Psychology, Journal of Consulting and clinical Psychology, Journal of Attention Disorders, and Perspectives on Psychological Science.

“This book explores behavioral inhibition and multiple factors that affect its development and deficiencies with the goal of reducing risk-taking behavior and impulsivity … . ‘general overview of the current knowledge base regarding behavioral inhibition and its etiology, from genetic and neurobiological underpinnings to social factors that influence its development’ … . The book is intended for a board audience of researchers, practitioners, policy scientists and makers, and trainees … . Numerous tables and figures clarify the text, and this book is easy to read.” (Gary B. Kaniuk, Doody’s Review Service, July, 2011)