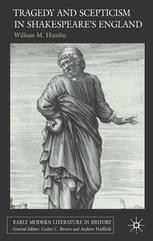 Tragedy and Scepticism in Shakespeare's England

Hamlin's study provides the first full-scale account of the reception and literary appropriation of ancient scepticism in Elizabethan and Jacobean England (c. 1570-1630). Offering abundant archival evidence as well as fresh treatments of Florio's Montaigne and Bacon's career-long struggle with the challenges of epistemological doubt, Hamlin's book explores the deep connections between scepticism and tragedy in plays ranging from Doctor Faustus and Troilus and Cressida to The Tragedy of Mariam , The Duchess of Malfi , and 'Tis Pity She's a Whore .

WILLIAM M. HAMLIN teaches Shakespeare, Renaissance drama, and early-modern literature at Washington State University, USA. Author of The Image of America in Montaigne, Spenser and Shakespeare (1995), he has also published essays and reviews in such journals as English Literary Renaissance, SEL, Montaigne Studies, Renaissance Quarterly, Shakespeare Studies and the Journal of the History of Ideas.

'William Hamlin engages with doubt in a refreshingly new and interdisciplinary manner, grounding his project in archival research and in a deep understanding of the ways in which literary and non-literary discourses can inform one another. Finding in Elizabethan and Jacobean tragedy a congenial environment for explorations of perception, knowledge and judgement, Hamlin masterfully combines a reading of Montaigne and the texts of ancient Pyrrhonism in order to clarify the historical reception of sceptical ideas in early modern England. The result is a book that convincingly approaches Shakespeare and his fellow dramatists from the perspective of a sceptical orientation whose importance in the Renaissance must not be underestimated'. - David Bevington, Professor of English, University of Chicago, USA

'William Hamlin's careful scholarly detective work shows in most illuminating fashion that sceptical themes are prevalent in some of the major literary writings in English at the time of Shakespeare, and that many authors were influenced, in varying ways, by Sextus Empiricus and by Montaigne. This is a very significant scholarly book which should be of great value to readers in many fields'. - Richard Popkin, Professor Emeritus of Philosophy, Washington University, USA, and adjunct Professor of Philosophy and History at the University of California, Los Angeles, USA

'This is an erudite and innovative study that establishes the centrality of early modern scepticism in English literary culture. Casting a wide net, William Hamlin provides a superb account of the diffusion of various strains of scepticism in Elizabethan and Jacobean England, along with the manner in which such ideas permeated contemporary drama, especially tragedy. Hamlin's meticulously researched, forcefully argued, and deftly presented analysis should prove invaluable both to literary scholars and intellectual historians.' - Mordechai Feingold, Professor of History, California Institute of Technology, USA