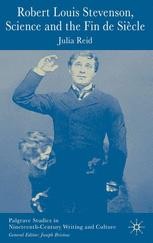 In this fascinating book, Reid examines Robert Louis Stevenson's writings in the context of late-Victorian evolutionist thought, arguing that an interest in 'primitive' life is at the heart of his work. She investigates a wide range of Stevenson's writing, including Dr Jekyll and Mr Hyde and Treasure Island as well as previously unpublished material from the Stevenson archive at Yale. Reid's interpretation offers a new way of understanding the relationship between his Scottish and South Seas work. Her analysis of Stevenson's engagement with anthropological and psychological debate also illuminates the dynamic intersections between literature and science at the fin de siècle.

'One of the many strengths of this volume is how its discussion of evolution, degeneration and anthropology affords us a clearer picture of Stevenson's development as a writer, and as a serious critic of cultural conflict and change... Robert Louis Stevenson, Science and the Fin de Siècle is a welcome addition to Stevenson studies.' - Linda Dryden, Journal of Stevenson Studies

'Reid's critical faculties are sharp and original, and her research is judicious, wide-ranging and deftly - almost weightlessly - deployed... Reid's book succeeds remarkably at deepening our understanding and appreciation of Stevenson and a broad spectrum of his works.' - Thomas L. Reed, Review of English Studies

'Julia Reid's Robert Louis Stevenson, Science and the Fin de Siècle - the latest in Palgrave's impressive and fast-growing Studies in Nineteenth-Century Writing and Culture series - is a very strong entry in [the] newly emerging canon of Stevenson criticism. Reid's study is the first, moreover, to give extensive treatment to Stevenson's complex and shifting relationship to fin-de-siècle science.' - Oliver S. Buckton, Nineteenth-Century Literature

'Robert Louis Stevenson, Science and the Fin de Siècle is a welcome addition to Stevenson studies, for it opens up for scrutiny some of the interstices between disciplinary fields, as well as the transactions between them, and makes a persuasive case for the relevance of this interdisciplinary approach to Stevenson's remarkably diverse and seeming inchoate oeuvre.' - Shafquat Towheed, ELT

'The book reaches beyond Stevenson aficionados to offer an astute take on the ways scientific discourse was implicated in battles over literary and generic value. [It] reveal[s] the value of more historicised and nuanced accounts of primitivism, and suggest[s] that our understanding of literary debates might be revitalised if we attend to the creative relationships between literature and science'

'fascinating study of Robert Louis Stevenson's attitude to evolution and degeneracy revelatory material Though a serious and academic book, this also has a great deal to offer fans of Stevenson's fiction as well as those interested in the science of his time. A truly rewarding read.'

'Reid convincingly demonstrates that his development of empathetic observation and his literary expression of insights born of these comparative experiences simultaneously benefitted from, and contributed to the construction of contemporary anthropological notions of cross-cultural understanding... Reid's able and discerning study transforms our view of Stevenson, bringing him more fully alive in a complex social circle churning with conflicting ideas and rapidly changing notions of human potential, both individual and cultural.' - Pamela Gossin, University of Texas at Dallas, Scotia vol. XXXII