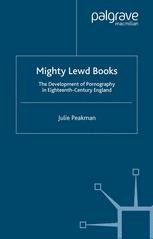 The Development of Pornography in Eighteenth-Century England

JULIE PEAKMAN is one of the most innovative of the young historians to emerge in the recent explosion of gender history. She lectures in Sex in History, is currently working on her second book on sexual behaviour in the eighteenth-century and is a fellow of the Wellcome Institute for the History of Medicine. She regularly appears at national and international conferences and in the media.

'Long overdue, an assessment of English pornography needs to pay attention to context as well as content. Peakman's book is rich with detail and she presents texts that have long been hidden from view. A must read.' - Margaret C. Jacob, UCLA, USA

'It is now generally agreed that the creation of new sexual stereotypes and forms of self-identity in the eighteenth century is central to the creation of 'modernity'. Part of this process was the emergence of new, and newly domesticated, forms of pornography and erotic writing. Mighty Lewd Books gives us a readable, engaging and conprehensive account of the history of eighteenth-century pornography and erotica. By exploring the history of this artefact of sexual behaviour at the moment when modern sexualities were created, Peakman provides a new and important understanding of both the meaning of dirty books, and the origins of modernity.' - Tim Hitchcock

'This...fascinating and intelligent survey shows how an explosion of obscene literature immediately followed the wild success of pioneering (but largely non-pornographic) fictions by Defoe, Swift, Richardson and their imitators...Porn's strongest selling point were that it was sexy, unrespectable and forbidden, of course, but Julie Peakman shows that it had other attributes, not always connected directly with sex. It popularised new scientific ideas in botany, anatomy and electricity. It stoked the fires of anti-Catholicism with its lecherous monks and nuns, and it encompassed radical ideas in politics.' - Financial Times

'This is a serious work for those with serious interest in the theme, but given the rollicking nature of that theme, there is reason to smile frequently.' - Rob Hardy, The Dispatch