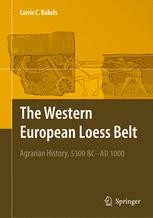 This book deals with the early history of agriculture in a defined part of Western Europe: the loess belt west of the river Rhine. It is a well-illustrated book that integrates existing and new information, starting with the first farmers and ending when food production was no longer the chief source of livelihood for the entire population. The loess belt was chosen because it is a region with only one type of soil and climate as these are all-important factors where farming is concerned.

Subjects covered are crops, crop cultivation, livestock and livestock handling, the farm and its yard, and the farm in connection with other farms. Crop plants and animals are described, together with their origin. New tools such as the plough, wheen, wagon and scythe are introduced. Groundplans of farm buildings, the history of the outhouse and the presence or absence of hamlets are presented as well, and the impact of farming on the landscape is not forgotten.

The loess belt was not an island and the world beyond its boundaries was important for new ideas, new materials and new people.

Summarising six millennia of agriculture, the thinking in terms of the Western European loess belt as one agricultural-cultural unit seems justified.

This book will be of interest to researchers in archaeology, history and agriculture, and to landscape engineers.