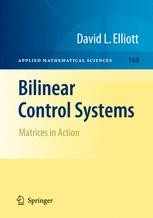 A control system is called bilinear if it is described by linear differential equations in which the control inputs appear as coefficients. The study of bilinear control systems began in the 1960s and has since developed into a fascinating field, vital for the solution of many challenging practical control problems. Its methods and applications cross inter-disciplinary boundaries, proving useful in areas as diverse as spin control in quantum physics and the study of Lie semigroups.

The first half of the book is based upon matrix analysis, introducing Lie algebras and the Campbell-Baker-Hausdorff Theorem. Individual chapters are dedicated to topics such as discrete-time systems, observability and realization, examples from science and engineering, linearization of nonlinear systems, and input-output analysis.

Written by one of the leading researchers in the field in a clear and comprehensible manner and laden with proofs, exercises and Mathematica scripts, this involving text will be a vital and thorough introduction to the subject for first-year graduate students of control theory. It will also be of great value to academics and researchers with an interest in matrix analysis, Lie algebra, and semigroups.

"… in spite of their intrinsic importance, there are relatively few treatments of bilinear control systems in monograph form that are accessible to students; that is why the book under review is a welcome addition to the control-theory literature…As with any good introductory treatment, the author smartly avoids trying to be encyclopedic and getting bogged down in peripheral technical minutia…

A unique feature of the book is the inclusion of a half-dozen Mathematica scripts that aid in explicit computations of such tasks as finding a basis for the matrix Lie algebra generated by the bilinear system’s matrices B1, . . . ,Bm and determining the generic Lie rank of a finite collection of linear vector fields. This book is highly recommended to both students and researchers in control theory."Kevin A. Grasse, MathSciNet, 2009

“This work by Elliott … is a textbook for a graduate course in a subarea of control theory. … The work provides an extensive reference section to the literature of the field. It will be useful to libraries supporting graduate programs in engineering with courses in control theory, and will also be valuable to researchers in disciplines that use control theory. Summing Up: Recommended. Graduate students, researchers, faculty, and practitioners.” (D. Z. Spicer, Choice, Vol. 47 (3), November, 2009)

“The monograph deals with problems of nonlinear systems analysis. The author examines bilinear control systems as time-invariant nonlinear systems with control inputs that appear as coefficients. … Examples of bilinear control systems have been given in a separate chapter. … Main results are illustrated by examples, proofs are given or cited. Appendices A-D contain standard facts about matrices, Lie groups and Lie algebras that are helpful for readers.” (Valeriy N. Tkachenko, Zentralblatt MATH, Vol. 1171, 2009)