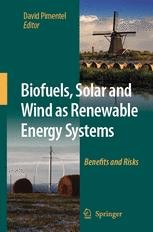 Currently, a heavy focus is on biofuels made from crops, such as corn, sugarcane, and soybeans, for use as renewable energy sources. Wood and crop residues also are being used as fuel. Though it may seem beneficial to use renewable plant materials for biofuel, the use of crop residues and other biomass for biofuels raises many concerns about major environmental problems, including food shortages and serious destruction of vital soil resources.

All renewable energy systems need to be investigated because humankind has only about 40 years of oil and gas reserves remaining. There is a 50 to 100 year supply of coal resources in the ground, but coal will become increasingly difficult to extract and will greatly increase the global warming threat.

David Pimentel is a professor of ecology and agricultural sciences at Cornell University, Ithaca, NY 14853-0901. His Ph.D. is from Cornell University. His research spans the fields of energy, ecological and economic aspects of pest control, biological control, biotechnology, sustainable agriculture, land and water conservation, and environmental policy. Pimentel has published more than 600 scientific papers and 25 books and has served on many national and government committees including the National Academy of Sciences; President’s Science Advisory Council; U.S Department of Agriculture; U.S. Department of Energy; U.S. Department of Health, Education and Welfare; Office of Technology Assessment of the U.S. Congress; and the U.S. State Department.

"The book dedicates most of its 20 chapters to biofuels … . The test is well referenced … . The collection amasses evidence for one side of the increasingly polarized debate about biofuels. It is an important addition to libraries that include works on biofuels … . Summing Up: Recommended. Professional and academic audiences, upper-division undergraduates and up." (M. K. Bomford, Choice, Vol. 46 (7), March, 2009)