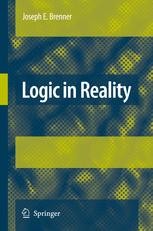 Logic in Reality argues that the fundamental physical structure of the world is logical as well as mathematical. The applicable formal logic of and in reality proposed (LIR) represents a radical departure from the standard notion of logic and its function. The book establishes LIR as a non-propositional logic with a unique calculus, one however that can be used intuitively with minimum symbolism. A new relational ontology is developed that demonstrates the fit of the LIR axioms with modern physics. The axioms and ontology of LIR together constitute a framework for describing and explaining complex real world processes, entities and events. Examples from the literature of on-going issues in philosophy, metaphysics and ontology are analyzed accordingly, including problems of causality, time and space, emergence and evolution.

This book is at the interface of logic, philosophy and science. It is intended for readers with interest and/or current involvement in process philosophy, ontology and in the philosophy or metaphysical aspects of science, especially, quantum physics, biology and cosmology. The content requires competence in reasoning, but not detailed knowledge of the fields discussed.

The critical extension in LIR of categorial non-separability to macroscopic interactive processes defines dynamic structural principles that underlie both scientific theories and their domains. LIR thus provides logical support for current metaphysical versions of structural realism. The author encourages readers to exercise a "new skepticism", since LIR is a way to interpret and accept dichotomies and contradictory explanations and to manage inconsistency in both philosophy and science.

Joseph E. Brenner was born in Paris in 1934, the son of the American sculptor Michael Brenner (Lithuania, 1885 – New York, 1969). After primary and secondary education in New York, he received B.A. and M.S. degrees from the University of Chicago. In 1958, he earned a Ph.D. in Organic Chemistry from the University of Wisconsin, which was followed by post-doctoral studies at the Swiss Federal Institute of Technology, Zurich and the Massachusetts Institute of Technology. In 1960, he joined the E. I. Du Pont de Nemours Company at its Wilmington, Delaware laboratory as a polymer chemist. From 1965 to his retirement in 1994, he was involved in corporate development and technology transfer with Du Pont de Nemours International in Geneva, Switzerland, working primarily in the Middle East, Africa and Eastern Europe. In 1998, he began collaboration with Basarab Nicolescu, Professor of Theoretical Physics at the University of Paris VI and President of the International Center for Transdisciplinary Research (CIRET) in Paris. The focus of this on-going collaboration has been to make the logical system of the Franco-Romanian thinker Stéphane Lupasco (Bucharest, 1900 – Paris, 1988) accessible to English-language readers. Brenner’s extension and up-dating of this work has been the subject of publications and presentations at conferences and seminars in Europe, Brazil and the U.S.A. Dr. Brenner is a member of the American Association for the Advancement of Science; the New York Academy of Sciences; and the Swiss Society for Logic and the Philosophy of Science.

"Logic and metaphysics are intimately connected, as major philosophers such as Kant and Wittgenstein have always been aware. Moreover, there is no reason to believe that contemporary views in logic and metaphysics do full justice to either topic. Brenner’s book, Logic in Reality, presents a distinctive picture of logic, metaphysics, and their inter-connection. Drawing on Stéphane Lupasco’s notion of a T-state, a sui generis, quasi-physical state emergent between opposites, Brenner provides a theory of scope that matches some of the classics of 19th century Dialectics. His book serves as a timely reminder that speculative philosophy can, and perhaps even should, strive to go beyond the bounds of current orthodoxies." Graham Priest, The University of Melbourne, Australia

"This book is a revelation, for the English-language reader, of the extraordinary potential of the work of the great French philosopher, Stéphane Lupasco (1900-1988). In an astonishing transdisciplinary synthesis, the author develops a remarkable series of extensions and applications of this work to current issues in logic, ontology and science." Basarab Nicolescu, author of Manifesto of Transdisciplinarity

"The rich and colorful modern physics system was developed on the basis of particle mechanics, in which every object is represented as a particle, so that the size, shape and internal structure of the object can be beautifully omitted.  Similarly, the development of modern logics system started with the classical logic, where each proposition is a point of information with two truth values -- true /false. There is no consideration of the content, structure, linguistic context and the evolution of the content. The development of information processing and artificial intelligence in the past several decades, however, has facilitated the revolution of logics to take into account proposition content, structure, linguistic context and the evolution of content. Therefore, various non-classical logics have emerged, including intuitionist logic, paraconsistent logic, paracomplete logic, modal logic, natural logic, relevance logic, multi-valued logic, fuzzy logic, inductive logic, abductive logic, and quantum logic, etc. Brenner's book, Logic in Reality, is a star in this revolution of logics. Based on concepts borrowed from the physics of reality, like dualities and probability, and with the help of ontologies, Brenner builds a formal logic system that can unify all non-classical logics to some extent. This is an important event in the development of logics at present." Professor Huacan He, Computer Institute of Northwestern Polytechnical University, Xi’an, P.R.C., Vice-Chairman of Chinese Association of Artificial Intelligence

"A book to read very carefully. The author launches a brave,timely,and thought provoking exploration throughout the vast territories of logic. Indeed, the project of an overarching "logic in reality", which has to incorporate crucial novelties occurred in the scientific arena during last decades,represents a formidable multidisciplinary challenge. We are living in the "information era", right in the middle of an information revolution affecting most of the sciences, which among other conceptual necessities, demands a careful revision of the "logical core" of our informational relationships with the environment: how the interpenetration of internal and the external "adjacencies" beget our reality... Do not miss the book!" Pedro C. Marijuan, Director - Bioinformation Group, Health Sciences Institute of Aragon, Zaragoza, Spain, Co-founder of the Foundations of Information Sciences initiative

"Brenner provides a long overdue up-date of the original insights of the Franco-Romanian thinker Stéphane Lupasco that logical features of physical reality force us to revise many of our ontological commitments. The book includes a substantial overview of both standard and non-standard logics, but the author emphasizes that his logic differs radically from all of them. His logic thus has the potential of providing a fresh perspective on some hitherto puzzling features and conceptual difficulties associated with current philosophy and science, especially in biology, cognitive science and cosmology, with implications for systems and complexity theory." Daniel MacArthur, Assistant Professor of Philosophy, York University, Toronto, Canada

"Joseph Brenner’s Logic in Reality represents a detailed effort to ground fundamental ontology on an alternative logic. … Logic in Reality is a fine thought-provoking book and it promises more of the same from a very able author. It makes a significant contribution to both scientific philosophy and non-standard logic." (Philosophy in Review, February, 2009)