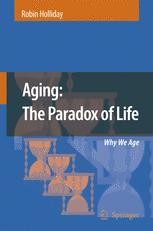 Aging: The Paradox of Life

For centuries people have been puzzled by the inevitability of human aging. For most of the second half of the twentieth century aging remained a mystery, or an unsolved biological problem. At the end of the 20th century a remarkable scientific discovery emerged. It was not a single discovery in the usual sense, because it was based on a series of important interconnected insights over quite a long period of time. These insights made it possible for the very first time to understand the biological reasons for aging in animals and man. It can already be said, however, that the many observations and insights that explain aging will not be accepted as established knowledge for a long time. The field is still full of scientists, and non-scientists, who are just happy to go on speculating about the "mystery" of aging. The aim of this book is to dispel ignorance by explaining in non-technical language what are the reasons for aging and the myth of excessive prolongation of life.

"Aging: The Paradox of Life, a new book by the scientist Robin Holliday, dispels ignorance by explaining in non-technical language the reasons for aging and the myth of excessive prolongation of life. He writes in an engaging style and with clarity, appealing to the general public and scientists alike." (Medical News Today, July, 2007)

"A slim book that serves as a reality check for the hyperbole and misinformation surrounding attempts at slowing or preventing senescence. … Written in mostly nontechnical language for a general audience, the book consists of 16 brief chapters, a short list of scientific references, and a glossary. … Aging: The Paradox of Life capitalizes on a fascinating topic of interest to everyone. The book is a quick read but geared toward a general audience … ." (Tony Miksanek, Journal of the American Medical Association, Vol. 298 (4), 2007)

"Aging is no longer an unsolved problem in biology … . The book succeeds in one regard … questions and others important in aging research are introduced in language accessible to the non-expert … . It seems likely that most researchers in the aging filed would agree with the author … . In the end, we are left with a colorful and entertaining just-so story about aging, evolution and the meaning of life that provides insight into the world-view of the author … ." (John Tower, BioEssays, Vol. 29 (11), 2007)

"Books about ageing are coming thick and fast as the implications of an ageing population become evident. Many are for academics, while others aim for a popular audience. This book attempts to reach both. … Would I recommend this book to students? Yes … . Would I recommend it to a layperson? Again, yes. … it is a good read." (Anthea Tinker, Times Higher Education Supplement, November, 2007)

"This is a single-authored discussion of aging, its causes, mechanisms, and implications, written for a lay public. Its purpose is to explain the mechanisms of aging and to dispel exaggerated claims of anti-aging medicine. These are worthy objectives and the book meets them all in style. … The elegant British style of biological writing evident here makes this book a particular pleasure to read. For those working in the field of aging without an extensive biomedical background, this is a really excellent read." (David O. Staats, Doody’s Review Service, April, 2008)

"This is a short popular book written by a famous geneticist and biogerontologist. ... In just 132 pages, he presents to general readers his personal understanding of the biological aging process ... and many other topics, such as the origin of religion and human warfare. ... Overall, this volume may be of interest to the general public, as it helps to balance the current bold optimistic expectations for the future of human life span and life extension with a healthy dose of skepticism." (Leonid A. Gavrilov and Natalia S. Gavrilova, The Quarterly Review of Biology, Vol. 83 (3), September, 2008)