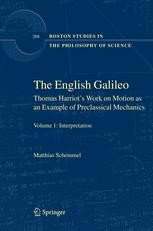 Thomas Harriot's Work on Motion as an Example of Preclassical Mechanics

The short series The Historical Epistemology of Mechanics presents the long-term development of mechanical knowledge. The books in this series combine the presentation of a broad selection of relevant sources with in-depth analyses of the long-term development of mechanical knowledge focusing on the early modern period. This series is conceived in analogy to the four-volume series on The Genesis of General Relativity (BSPS 250).
The English Galileo, the first book in this series, investigates the shared knowledge of preclassical mechanics by relating the work of Thomas Harriot on motion, documented by a wealth of manuscripts, to that of Galileo and other contemporaries.
Harriot and Galileo indeed exploited the same shared knowledge resources in order to approach the same challenging objects. While the paths Harriot traces through the shared knowledge are different from Galileo’s, the work of the two scientists displays striking similarities as regards their achievements as well as the problems they were unable to solve. The study of Harriot’s parallel work thus allows the exploration of the structure of the shared knowledge of early modern mechanics, to perceive possible alternative histories, and to distinguish between individual peculiarities and shared structures of early modern mechanical reasoning. This study has received two distinguished awards, the Junior Scholar Award of the Georg Agricola Society and the Georg Uschmann Award of the German National Academy of Sciences, Leopoldina.

“Schemmel’s expositions are extremely clear, and he takes pains to provide careful explanations of Harriot’s more complex constructions … . Historians of early modern natural philosophy or mechanics will find much to reward their efforts in The English Galileo. Schemmel’s study should also be applauded for shedding valuable light on an unjustly marginalized figure.” (Stephen Clucas, ISIS, Vol. 104 (3), September, 2013)

“This book is an ambitious attempt to catalogue and interpret the unpublished manuscripts on mechanics by English mathematician and philosopher, Thomas Harriot … . Schemmel’s contribution to this project focuses on Harriot’s attempts to describe bodies in motion, particularly projectiles. … Readers specialising in the history of mechanics and motion would undoubtedly learn a great deal about Harriot … .” (Luciano Boschiero, Metascience, Vol. 21, 2012)

“The English Galileo offers the first comprehensive study of Harriot’s work on motion. More specifically, the book is devoted to the reconstruction, detailed analysis, and interpretation of Harriot’s work on projectile motion and the free fall of bodies. … Matthias Schemmel has considerably enhanced our knowledge not only of Harriot but also of the development of mechanical knowledge. … Schemmel’s work is an outstanding contribution to a better understanding of the rise of a mechanical worldwide. Admirers of Galileo will also become admirers of Harriot.” (William R. Shea, Mathematical Reviews, Issue 2012 g)

“The title of the book is absolutely justified. The author argues that both Galilei and Harriot worked within a framework that he calls preclassical mechanics. It is a mix of several elements. It consists of parts of old traditions like Aristotelian physics combined with the knowledge of practitioners like gunners. … Schemmel did a wonderful job and … this book about the crucial transition from preclassical mechanics to classical mechanics represents the beginning of more work on Harriot.” (Teun Koetsier, Zentralblatt MATH, Vol. 1244, 2012)

"Matthias Schemmel in his superb edition of Harriot’s work on free fall and projectile motion has independently used the same technique of facsimile and commentary. … The second of his two volumes consists entirely of reproductions of the 180 folios he has selected from Harriot’s work on motion under gravity, together with schematic analyses of their contents. … a fine contribution not only to Harriot scholarship but to a deeper understanding of the development of early modern science and mathematics." (Jackie Stedall, BSHM Bulletin, Vol. 24, 2009)