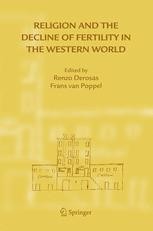 Religion and the Decline of Fertility in the Western World

The impact of religion on family and reproduction is one of the most fascinating and complex topics open to scholarly research. The linkage between family and religion has received no systematic treatment on a comparative basis, either in the social sciences or in historical studies. This book provides new insights into the relationships between religion and demography during the crucial period of the nineteenth and early twentieth century. Apart from providing a wealth of descriptive information on family life and fertility in different national and religious settings, the major strength of the book lies in its conceptual insights. The book will attract and stimulate readers at the advanced undergraduate or at the graduate level in history, religious studies, women’s studies, family studies, social demography, sociology, and anthropology due to its subject matter (moral issues related to fertility decline and family change played an important role in processes like secularisation, and religious secessions in the19th and 20th century), its analytical approach (all chapters make use of micro-level data on family and family size and use comparable statistical methods specifically suited for these kinds of data), and its theoretical orientation (the chapters explicitly focus on the variety of mechanisms via which religions had an effect on family life and fertility). The book is truly cross-cultural, showing the similarities as well as the differences in the positions of the various churches on matters important for reproduction in Western Europe, the US and Canada in the period 1850-1950. The consideration of the causes of variations in family size in the past provides a refreshing perspective on contemporary effects of religion on reproductive behaviour and the family.

"This volume successfully promotes an agenda for research on the complex and diverse historical relationships between fertility, identity, community and religion." Simon Szreter, Fellow of St John's College, Cambridge

"These well-researched and lucidly argued papers will provide important reading for all those interested in the religious history of the nineteenth century."                    Hugh McLeod is Professor of Church History at the University of Birmingham

"This is a very valuable new resource for scholars, both established and new, to understand the role of religious institutions in family and demographic behavior and the ways in which those behaviors change across long periods of time."               Arland Thornton, Director, Population Studies Center, University of Michigan

"This book shows also that modern demographic and social history is able to revive the past in ways unthinkable only a generation ago."                                          Massimo Livi-Bacci is Professor of Demography, University of Florence, and honorary president of the "International Union for the Scientific Study of Population".

Renzo Derosas is associate professor at the Department of History of Ca' Foscari University, Venice, where he currently teaches Economic History. He has published extensively on Italian social and demographic history, on comparative demographic history, and on historical methods.

Frans van Poppel is senior researcher at the Netherlands Interdisciplinary Demographic Institute (NIDI) in The Hague, and was associate professor at the Radboud University Nijmegen. Demographer and historian, he has published numerous articles on the population history of the Netherlands.

Simon Szreter, Fellow of St John's College, Cambridge, and Reader in History and Public Policy in the Faculty of History at Cambridge University, author of Fertility, class and gender in Britain 1860-1940 (1996) and of Changing family size in England and Wales 1891-1911: place, class and demography (with E.Garrett, A.Reid and K.Schurer) (2001)

"The power of religion- culture writ large- is once more back at the top of the international political agenda and so this publication is most timely. Scholarly studies of the historical transformations in fertility during the last two centuries in the west have given rather too little consideration to the religious context. Renzo Derosas and Frans van Poppel are to be congratulated on assembling a talented new generation of international scholars interested in promoting a revived agenda of comparative questions about the historical relationship between reproduction and religion. The contributors combine demographic, historical, sociological and anthropological skills and perspectives. This volume successfully promotes an agenda for research on the complex and diverse historical relationships between fertility, identity, community and religion."

Hugh McLeod is Professor of Church History at the University of Birmingham, former president of the Ecclesiastical History Society and president of CIHEC, the international organisation of historians of Christianity, author of Class and Religion in the late Victorian City, of Piety and Poverty: Working Class Religion in Berlin, London and New York 1870-1914 and of Religion and the People of Western Europe 1789-1989 and of Secularisation in Western Europe 1848-1914, editor of the Taylor & Francis series, Christianity and Society in the Modern World.

"Although most parts of Europe and North America saw a substantial decline in fertility from the later nineteenth century, the extent and pace of decline varied between and within countries. Many observers have seen religion as a major reason for these differences, but the link between religion and levels of fertility has often been explained in a crude and over-generalised way. This collection of case-studies reveals a much more complex and varied picture. Religion was indeed a key factor, but it did not operate in any neatly predictable way. Catholics, Protestants and Jews could each behave very differently according to social and political context. Even within the same city, Catholics of different ethnicities, liberal and conservative Protestants, Jews living in or out of the ghetto, could have different patterns of fertility. Moreover, the ability or even the willingness of religious authorities to enforce their teachings on sexual ethics also varied enormously. The contributors are refreshingly sceptical of the orthodoxies of demographic or religious history and sometimes their detailed local work produces quite unexpected results. These well-researched and lucidly argued papers will provide important reading for all those interested in the religious history of the nineteenth century."

"Religion and the Decline of Fertility in the Western World addresses one of the most important issues in the history of the West: the dramatic decline of fertility and the role of religion and secularization in producing it. The editors of the volume—Renzo Derosas and Frans van Poppel—have assembled an outstanding team of historians, geographers, and social scientists to address in one volume this important issue. These scholars have been very industrious and innovative in organizing and analyzing new and rich data sets concerning religious affiliation, religious commitment, and childbearing from individuals and communities across a wide array of settings in the Western world—from Europe to North America to Israel. They provide important new insights into the ways in which religious affiliation and religiosity do and do not influence individual childbearing behavior and community trends—with the nature of those influences varying across and within settings. This is a very valuable new resource for scholars, both established and new, to understand the role of religious institutions in family and demographic behavior and the ways in which those behaviors change across long periods of time."

Massimo Livi-Bacci is Professor of Demography, Faculty of Political Science "Cesare Alfieri", University of Florence, and honorary president of the International Union for the Scientific Study of Population. He is the author of A Concise History of World Population (Blackwell), The population of Europe: a history (Blackwell), Population and poverty in the developing world (with Gustavo De Santis; Clarendon), and Population and nutrition: an essay on European demographic history (Cambridge University Press).

"Voluntary control of reproduction has been the most revolutionary change in human behavior of modern times. A group of scholars, armed with modern tools of quantitative analysis, sustained by strong theoretical considerations, untangles the influence of religion teaching and dogmas, religious affiliation, and religiosity, on the decline of fertility in the West in the late XIX and early XX century. Micro analysis and individual data provide the fertile humus of their research. This book shows that being Catholic, Protestant or Jew has shaped behaviors through a variety of specific mechanisms filtered by the social and the institutional setting proper of each individual society. It shows also that modern demographic and social history is able to revive the past in ways unthinkable only a generation ago."

"Although recent work in the field had produced a better understanding of the linkage between family and religion, the role of religion in the historical fertility transition remained obscure. … In adding so handsomely to the evidence and insights available to extend theorizing in this field, the authors and editors of this volume have made an impressive contribution to the literature. It is an essential source for those interested in this intriguing subject and will no doubt add to their number." (John Simons, Population Studies, Vol. 61 (3), 2007)