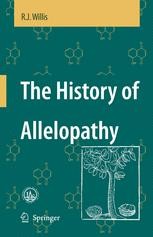 The History of Allelopathy

Allelopathy is the study of the chemical interactions of plants. This concept has been known since antiquity, and first appears unambiguously in written form in about 350 B.C. in the works of Theophrastus. This book  provides a detailed account of the concept of allelopathy as it has occured through the course of botanical literature from the earliest recorded writings to the modern era.

In the ancient world, the negative and positive interaction of plants was expressed within the framework of antipathy and sympathy of things. As such, antipathy and sympathy were more widely understood than generally appreciated, and indeed were assimilated in aspects of culture outside of botany and agriculture.

This book firstly addresses the question of what is allelopathy, as allelopathy is one of these unfortunate terms in ecology that has no unified definition. The book then examines the major episodes in the history of allelopathy: the writings from classical Greece and Rome; mediaeval Arabic, Indian and Chinese work; the advent of printing and promulgation of information in the 16th and 17th centuries; the 18th century and the theory of root excretion; the 19th century and the influence of A.P. de Candolle; the early 20th century and the work of Pickering and the USDA Bureau of Soils; and the years leading to the current era.

The work draws extensively on original sources, and consequently many of the assertions published in relation to the background of allelopathy, are shown to be incorrect, or at best very inadequate. There is a great deal of information presented, in a consolidated or accessible form, for the first time. The book endeavours to set the history of allelopathy within both a scientific and sociological context.

"Allelopathy, the study of the chemical interactions of plants, often receives little attention in botanical curricula. Willis (Univ. of Melbourne, Australia) presents a thorough, readable history on this subject, which has enjoyed a recent resurgence in research. … this well-written book presents a lucid history of the development of an important scientific concept. It is a classic example of how significant ideas are a collaboration of scientists past and present. Summing Up: Highly recommended. Upper-division undergraduate through professionals in botany or agriculture." (M. S. Zavada, CHOICE, Vol. 45 (10), June, 2008)